A Model Fantasy: Most Reliable Global Models Forecast Epic Storm in About Eight Days over Northeastern US

It has been the talk of weather enthusiasts and meteorologists alike this Sunday in late October, with the Euro, Canadian, and to some extent the American GFS model showing a complicated interaction between a tropical cyclone that forms in the Caribbean and a deep upper level trough that dives into the central US and captures this tropical cyclone, resulting in a strong storm over the Northeast US. Let’s break down what needs to happen for this extreme solution to occur and examine how likely something like this is. 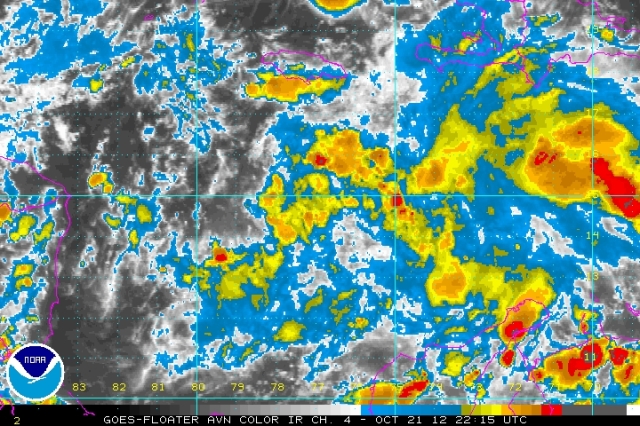 First and foremost, a key piece to the puzzle is what happens to this festering area of low pressure in the Caribbean Sea. The three major global models mentioned above eventually develop this into a moderately strong tropical cyclone over the Bahamas. However, right now the system is not very well organized, with a lack of deep convection near the center of circulation.

This is likely due to two reasons. First of all, 99L is encountering 10-20 knots of westerly wind shear. In addition, as can be seen below, the invest is a sprawling system, part of what’s called a monsoonal gyre:

There is low level vorticity, or spin over a large chunk of the central Caribbean Sea associated with this system. This combined with the above mentioned shear is making it hard for 99L to consolidate. However, there is a concentration of higher vorticity south of Jamaica, and this is what most models eventually spin into a tropical cyclone.

As a shortwave over the northwestern Atlantic misses 99L to the north, the invest should slowly drift towards the west of southwest over the next couple days. This part of the forecast is generally well agreed on by our models at this time. As we head towards Tuesday-Wednesday, a longwave trough will begin digging over the central US, and this will slowly squeeze ridging over the southeastern US, drawing 99L northward:

5 day GFS loop can be viewed at the above link.

This will likely result in a track near or just west of Jamaica, towards Cuba and into the Bahamas in 4-5 days. How strong the system gets while in the Caribbean is in question.

There are hints that as the low pressure area sits near or south of Jamaica that it will be in a favorable upper level environment with low wind shear and good upper level outflow. As can be seen above, the 3-day GFS projection shows 10-20kt upper level winds over 99L with a belt of sub-tropical westerlies venting the system. In addition, even though we are approaching November, waters in the western Caribbean still contain a ton of heat:

Needless to say, if 99L can consolidate into a smaller system before moving north towards increasing shear Tuesday into Wednesday, it may become a formidable cyclone before impacting Cuba.

However, given the gyre origins of the system, a looser, weaker system is probably more likely until the system clears the Caribbean around mid-week. Given the amount of time the system will sit in the Caribbean and the generally favorable environment for organization/intensification, I am fairly confident a tropical cyclone will form near or south of Jamaica over the next two to three days and then lift north towards Cuba

Once 99L clears Cuba is when the uncertainty goes from “normal” to “high”, which is not too uncommon for tropical cyclones or weather forecasts in general:

The GFS, Euro, and Canadian all appear to be in decent agreement in phasing 99L with an upper level trough (shown over the Florida Straits in this image with 99L over the central Bahamas) towards the end of this week. This results in 99L becoming a larger system and in deepening of the system—which would likely become sub-tropical after a merger with a cold-core upper level trough.

And at this point, this is when the insanity on this afternoon’s global models began:

99L is expected to drift to the north or north-northeast over the Bahamas into this upcoming weekend. After this happens, there are two main options:

Normally, option 2 would be the much less likely scenario, and in this instance, it still is, but let’s explore what makes option 2 a possibility at this point:

The short answer is the extreme blocking occurring. Note the extremely strong ridging occurring over Alaska and Greenland on this 5-day ECM Ensemble forecast. These two ridges help facilitate a cross polar flow which aims arctic air towards the central US, resulting in a deep trough forming in that area.

In addition, the ridge over Alaska is pinning a very strong low pressure system over the Gulf of Alaska, which will send energy southeast towards the US and help deepen the central US. The Greenland ridge is pinning a strong 50/50 low near Newfoundland, which blocks up the flow over the eastern US, and combines with ridging over the eastern US to keep 99L from racing out to sea. If 99L moves out to sea, it will take its time to do so.  This increases the chance for a tropical entity and a deep polar trough phasing near or over the eastern US next weekend.

In addition, the blocking will result in a very strong northerly jet streak being dislocated very far south of this time of year. Per the Euro above, much of the Eastern US will be in a zone of good upper level lift, provided for by two jet streaks. This will favor an intensifying storm, potentially dramatically so with by my count two pieces of jet energy and one piece of tropical energy possibly involved, over the eastern US, if 99L is drawn westward by the incoming central US trough next weekend.

Now, let’s remember to throw caution to the wind. There are several things that need to happen for this extreme solution to play out:

These details will slowly become clearer as the week moves on…we should know more about the development chances for 99L by Tuesday or Wednesday…we should know about what the –NAO will do by Wednesday or Thursday…we should know what kind of energy does or doesn’t break off of the Gulf of Alaska low by Thursday…and by Friday this energy will be sampled over western North America, which will give us a good idea of what kind of a trough we will see over the central US.

Essentially, until these details slowly work themselves out, it will be a model guessing game as to what will happen next weekend into early next week. While no one of the above 4 “requirements” are off the wall, we need them to occur perfectly for a high-amplitude storm to occur, which is why situations such as these, which haven’t occurred since Halloween of 1991 (perfect storm) or Hurricane Hazel in 1954 are so rare over the eastern US.

This entry was posted in Pattern Discussion, Storm Speculation. Bookmark the permalink.