Hurricane Matthew has produced very heavy rainfall resulting in severe flooding, damaging winds, and dangerous storm surge in Haiti and Cuba on Tuesday, and is continuing to affect the islands into Tuesday night. Exact amounts of damage ad fatalities may not be known for at least several days. Matthew will likely officially be a category 3 by the 11PM Tuesday advisory from the National Hurricane Center, down a peg from before it hit Haiti and Cuba but still a dangerous major hurricane. Matthew will move slowly to the north-northwest through the Bahamas through Thursday night and remain a major hurricane. Intensification into at least a category 4 hurricane is possible once Matthew moves farther away from the mountainous terrain of Cuba and Haiti and gets a chance to re-organize. A prolonged period of strong winds, heavy rain, and storm surge is expected across the Bahamas, with conditions not completely improving until Thursday or Friday.

The forecast path of Matthew remains very close for the east coast of Florida, with Matthew expected to be a major hurricane as it makes its closest approach to the Sunshine State Thursday through Friday night. Hurricane watches and warnings along with tropical storm warnings are up for a good portion of Florida. Regardless of whether or not the center makes land fall, storm surge along the coast, heavy rains, and gusty winds are expected, especially over eastern Florida. The possibility still exists that Matthew makes landfall in eastern Florida, in which case a significant storm surge and wind damage would occur. Residents in Florida should continue to closely monitor the progress of Matthew and evacuate if ordered to.

After impacting Florida Matthew is expected to turn northeast and accelerate, passing close to or potentially hitting southeastern Georgia and the Carolinas Friday night through Saturday night. Right now, heavy rain, gusty winds, and dangerous beach conditions are expected in the Carolinas and southeastern Georgia. The odds of a direct impact on North Carolina may be decreasing, while it’s still too close to call for Georgia and South Carolina. Anyone from the Outer Banks points southwest along the coast should continue to closely monitor Matthew and heed the advice of local officials. Some evacuations have either already been ordered or are being planned in parts of the Carolinas. Tropical storm or hurricane watches could be issued fairly soon for portions of the Georgia, South Carolina, and North Carolina coastlines.

North of the Carolinas, it still appears more likely that Matthew moves east or northeast, away from the Mid Atlantic and New England coasts, but at minimum dangerous beach conditions are likely in these areas into early next week. A track farther west that brings rains and stronger winds is still not impossible, so folks from Virginia north through New England need to continue to closely monitor Matthew…however, the odds of a direct hit appear to be decreasing. The areas most likely to potentially see heavy rain and gusty winds are eastern Virginia and the Delmarva Peninsula.

Many model images used in this post, including the trend loops, can be found at http://www.tropicaltidbits.com

Satellite loops show that land interaction has had some negative impact on Matthew; the eye briefly tried re-appearing between Haiti and Cuba late this afternoon, but has again clouded over as the center moves into the eastern tip of Cuba, which does feature mountainous terrain. The eyewall convection isn’t quite as intense as it has been for the last few days, with cloud top temperatures of -60 to briefly -70C in the more intense convection, as opposed to a ring of -70C or colder cloud tops that was visible Monday evening. There may be some more additional weakening over Cuba tonight, as the eastern end of the island is very mountainous.

The most recent microwave image, from 7:15PM EDT Tuesday, shows that Matthew still has an intense and well-organized inner core, despite some degradation of appearance on conventional satellite imagery. There is still a closed and intense eyewall surrounding a symmetric eye. Radar from Guantanamo Bay also showed similar organization; unfortunately, high mountains east of the radar site are now blocking the beam, preventing the radar from getting a picture of the inner core.

Recon has found that Matthew’s pressure has come up to around 960mb, a good 25mb higher than early Tuesday morning when Matthew his the western tip of Haiti. Also, flight level winds are generally around 115 knots, with reliable SFMR readings of around 110 knots, suggesting that Matthew is in all likelihood no longer a category 4 hurricane. Some further weakening is possible over the next few hours as Matthew’s inner core continues moving over high terrain; regardless, Matthew will likely emerge as a category 3 hurricane north of Cuba later tonight. My guess is winds weaken to 100 or 105 knots before bottoming out later tonight. Matthew still has a large area of hurricane force winds per recon. 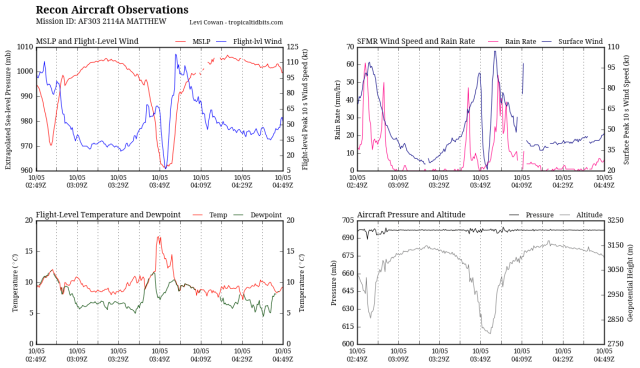 The most recent passes feature flight level winds of almost 120 knots and peak SFMR winds of around 105 knots; this doesn’t support category 4 intensity, but parts of the eyewall are over eastern Cuba, so the plane may not have sampled the strongest winds.

Water vapor imagery continues to show an upper level trough/low to the west of Matthew over the Gulf of Mexico, causing stronger south-southwesterly winds to occur just west and north of Matthew. It appears, based on symmetric outflow and a symmetric CDO, that these south-southwesterly winds aloft aren’t quite making it to Matthew due to the strong upper level anti-cyclone located over the hurricane. These stronger upper level winds are helping to provide for strong outflow north of the storm. The combination of very weak shear and strong outflow is expected to continue in the short term as Matthew begins moving over the Bahamas. There is also little evidence of very dry air in the vicinity of Matthew; the main impediment at the moment is interaction with mountainous terrain.

Sea surface temperatures over the Bahamas and off the east coast of Florida ahead of Matthew range from 29-31C, with warm waters extending to a fair depth; this is mid to upper 80s Fahrenheit water. The combination of low shear, a moist atmosphere, strong outflow, and very warm waters suggests Matthew may have a window to become a very powerful hurricane by Thursday or Friday over the Bahamas and possibly very near the Florida coast. We’ll have to see how intact the inner core is once it moves off of Cuba; it appears that it should be fairly intact; if the inner core remains fairly organized, the prospects of intensification back into a category 4 and possibly close to a category 5 hurricane is on the table. An eyewall replacement could occur at some point which may cause intensity fluctuations that are hard to predict very far in advance. Regardless, Matthew will likely be a very strong, fairly large, and dangerous hurricane over the Bahamas and near the Florida coast through the end of the work-week.

Matthew is currently moving north-northwest through a weakness between ridging over the central Atlantic and over the eastern Great Lakes and New England. This weakness is caused by both the corpse of a cut-off low moving off of the New England coast and an upper level trough over the Gulf of Mexico. As a trough amplifies over the central US, the ridging will strengthen over the Northeast; at the same time, the cut off low will move east and weaken, and the Gulf of Mexico trough will weaken and move west. Matthew isn’t moving particularly fast and will be nudge to the north-northwest over the next couple of days as the ridging builds ahead of the storm.

Trends discussed yesterday in the models have continued in the ensembles over the last day in the relatively short term portions of the forecast:

First, the European ensembles. The ensembles have continued the trend to move the cut-off low east quicker, allowing for ridging to build in stronger ahead of Matthew, pushing the storm farther southwest in the near term. This has significant impacts on the threat level to Florida. In addition, there continues to be uncertainty regarding the evolution of shortwaves moving in off of the Pacific and hence the amplitude of the shortwave moving through the Midwest. This run has the shortwave a little farther east at 12z Friday, and also has a somewhat stronger shortwave diving into the west coast; this could result in height rises over the central US, which would kick the first shortwave over the Midwest to the east/northeast quicker, giving it less of an opportunity to eventually potentially pick up Matthew. The EPO ridge over Alaska has actually come in a bit stronger, but the evolution of the shortwaves under that ridge remains uncertain, with models jumped around with them quite a bit.

Here is a look at the recent track forecasts from the GFS and European ensemble members: 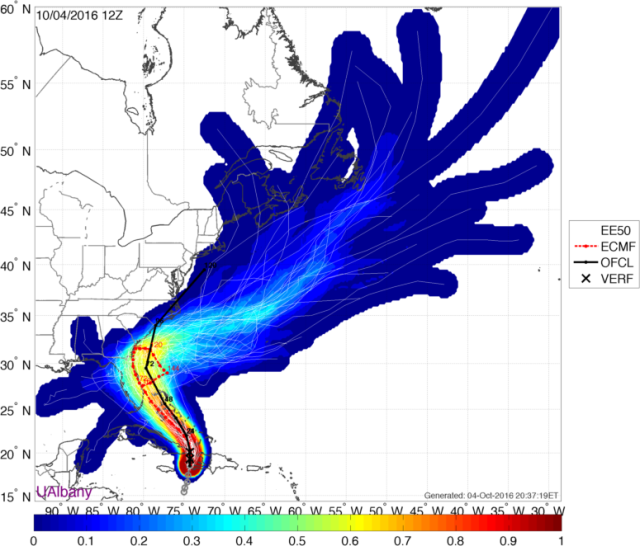 In general, both sets of ensembles have nudged west a little bit closer to Florida since yesterday; more than half of the European ensemble members bring the center within 50 miles of the Florida coast, and it appears a good 30% actually have a true landfall. The GFS ensembles may be a tough farther east, but in general also imply a very close call for Florida.

The ensembles have trended slower with Matthew and have trended towards more ridging over the central US, causing the trough to be less amplified. This makes it less likely that Matthew gets captured by the trough and directly impacts the Mid Atlantic and New England. I was skeptical of that solution yesterday and am not any more enthused about it today.

A few ensemble members and operational model runs show the trough missing Matthew so far to the north that it remains trapped off the Southeast coast while ridging builds back in over the eastern US. It is too far out to speculate on whether or not this new solution holds any validity, or on how strong Matthew would or would not be if it ended up sitting off the coast for a more extended period of time.

-Matthew will move through the Bahamas as a category 3 or 4 hurricane over the next couple of days. Significant impacts will accompany it.

-The threat to Florida appears to have increased a little bit more due to more ridging expected ahead of a Matthew, and the slower motion the Euro suite has been insisting on appearing to be more realistic.

-There is still some threat to the Carolinas, but the slower storm and less amplified trough suggest it may get kicked more due east, meaning it may move farther away from the coast that angles to the northeast with time.

-The threat of a direct hit north of North Carolina is extremely low, but I suppose the possibility can’t be ruled out. Indirect impacts such as heavy rain are possible, mainly in eastern Virginia and the Delmarva. Dangerous beach conditions will occur along the entire east coast.

-Climatology suggests that Matthew being completely missed by the trough and then completing an anti-cyclonic loop off the Southeast coast and near the Bahamas isn’t a likely solution, but several pieces of guidance are now showing it…Matthew is slowing down its forecast northward movement over the next few days, and the trough has continued to trend less amplified, so we will watch that possibility.