This post will be divided into four sections, so you can scroll down to what you’d like to read about.

-Model madness: Trying to pin down the track of Sandy into the Northeast US

-Meteorological Insanity: Trying to figure out how strong Sandy will be as it hits the Northeast US

Above is a current look at hurricane Sandy, as of 12:45pm EDT on this Friday. As has been expected, shear and dry air associated with an upper level trough of low pressure have caused Sandy to expand and begin taking on sub-tropical characteristics. Sandy is still a powerful cyclone with sustained winds of 80MPH over the northern Bahamas and a minimum central pressure of 970mb as it slowly moves north.

As Sandy pulls north of the Bahamas it is expected to maintain minimal hurricane intensity due to a large area of upper level divergence near the cyclone. The wind field of Sandy, as can be seen on the satellite image above, is expanding, and will continue to slowly expand as Sandy becomes more and more non-tropical on its way up the east coast. Due to the large nature of the wind field, even though Sandy is expected to track well off-shore of the Carolinas, tropical storm force winds will be possible, especially in areas close to the coastline.

When looking at the GFS model forecast for Saturday morning, what stands out is although strong upper level winds will continue to pierce through the center of Sandy off the southeast US coast, the very strong upper level winds appear to be “fanning out” north of the hurricane. This will allow for significant lift to occur with Sandy through the weekend and allow the storm to maintain a low pressure and category 1 hurricane intensity this weekend, even if the system doesn’t look like a classic hurricane anymore.

Model madness: Trying to pin down the track of Sandy into the Northeast US

Above is a look at this afternoon’s GFS (American) and European model runs. This afternoon’s GFS took Sandy farther north; towards the Long Island area this run of the model while the European model took Sandy farther north than it has, however is still farther south than the GFS into NJ. When looking at the two models above valid Sunday morning, the differences are very subtle:

Other than small disagreements in how far east Sandy can swing out before being captured by the incoming trough, the two models both appear to handle the phase of Sandy and the incoming trough well…with both models showing a little bit of Fujiwhara interaction between the two features before Sandy accepts its fate in merges with the trough.

Given this general agreement, I still expect Sandy to landfall in NJ Monday night or Tuesday morning, with some risk of a landfall farther north or south: 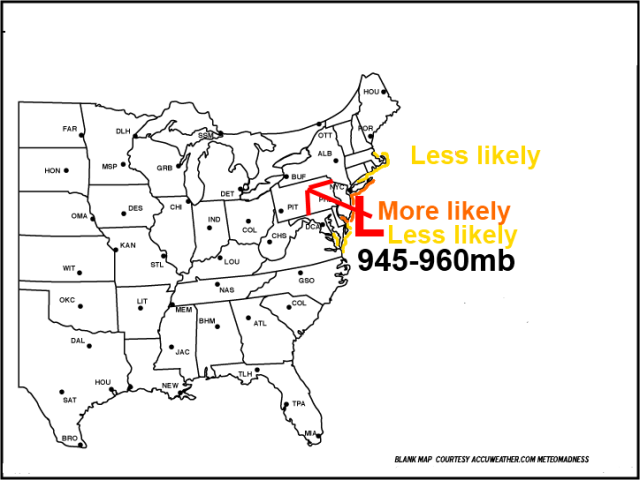 Risks to this landfall forecast:

Meteorological Insanity: Trying to figure out how strong Sandy will be as it hits the Northeast US

Above is a look at meteorological insanity—a hybrid, very strong low pressure system pegged under a very deep upper level low hitting the east coast of the US—as projected by the European model. The media has tossed around terms like “Frankenstorm” and “Perfect Storm II” to describe this storm as it moves ashore. Will it be all that it’s hyped to be as it moves in? 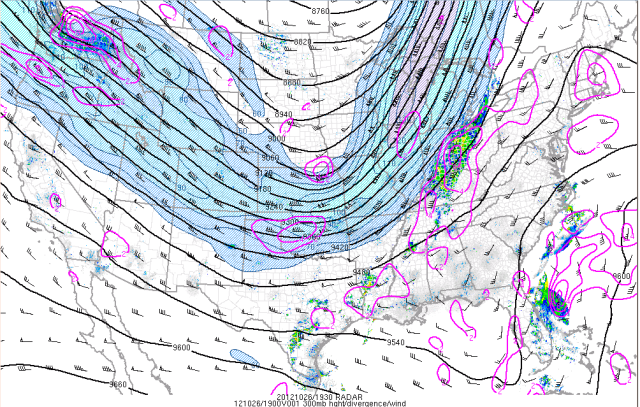 To answer that question, let’s look at the forces that will help strengthen or weaken Sandy into early next week. A look at the current upper level plot shows that strong upper level winds are causing considerable shear over Sandy, which is located just north of the western Bahamas at the time of this image. However, one can see that as mentioned earlier, the upper level winds north of the center are fanning out, which is creating upper level divergence or lift, shown by the purple. This will help Sandy maintain its deep central pressure—currently at 970mb—and aid in convective development, when combined with the warm waters of the Gulf Stream:

These two factors support Sandy remaining a deep cyclone through the weekend as it tracks off the southeast US coast. The strong upper level winds however will continue to shear Sandy, meaning it will remain a sub-tropical cyclone, and also meaning any intensification over the weekend will be minimal. Essentially, I am expecting Sandy to maintain category 1 hurricane intensity with a pressure around 970mb through the weekend.

As the trough currently over the upper Midwest continues to amplify, an extremely impressive jet structure will set up over the eastern US and western Atlantic. The above image off the GFS model, valid for Sunday evening, shows three jet streaks providing for mass evacuation of air over Sandy (due east of North Carolina at this point). This will provide for tremendous lift and should allow for Sandy to begin deepening more at this point. 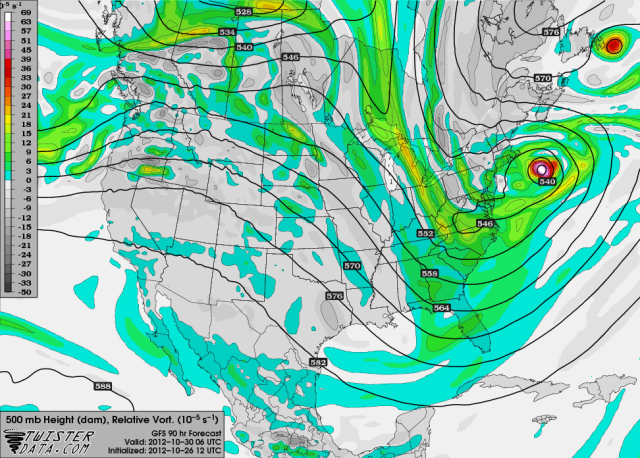 Once Sandy phases with the upper level trough on Monday, significant mid-level height falls will ensure over the storm. Note how on this image, from the GFS valid early Tuesday morning, the mid-level heights, represented by the black lines, are much lower along the Mid Atlantic coastline than over surrounding areas. This occurs when the lower heights with the trough combine with the lower heights of Sandy, resulting in a very deep mid-upper level low pressure system over Sandy. This, combined with significant mid to upper level spin in the atmosphere, indicated by the color-fill, will result in tremendous low to mid-level lift with Sandy, which will aid in the system further lowering its minimum central pressure Monday as it nears the northeastern US.

In addition, once the warm, remaining tropical core of Sandy gets caught under the cold core trough aloft, it will aid in providing for lift over Sandy due to the buoyant nature of warm air.

These factors will allow for Sandy to strengthen 10-20mb (I’m talking central pressure here) once the phase occurs on Monday. Seeing as though I expect Sandy to maintain a pressure of 965 to 970mb until the phase, I still like yesterday’s forecast of a 945-960mb low pressure system hitting somewhere in the Northeast Monday night or Tuesday. Wind wise, this would correlate to a large area of 70-80MPH winds over water, or a category 1 hurricane. These are sustained values, gusts will be higher.

Due to the large wind field that will be associated with Sandy as it approaches the Northeast, a large amount of water will be moved around. As Sandy moves off the Southeast US coastline an easterly flow will allow some water to pile up even south of the expected landfall point. Here, rises will be more negligible. Near and north of the landfall point, which at this point appears to be NJ or thereabout, an extended period of strong onshore winds over a large area will push a lot of water towards the shoreline. It is too early to put specific numbers on the surge threat, however, in the red area, should Sandy remain on the forecast track, storm surge values would be several feet or more, meaning areas on the coastal plain would see several feet of storm surge flooding. This water will be able to pile up for several tide cycles, with the onshore flow increasing Sunday night and not decreasing until Sandy makes landfall on Tuesday. This will coincide with higher than normal lunar tides to maximize the potential storm surge flood threat. Please heed any evacuation orders that may be issued along the Northeast US coastline.

Given the large and intense wind field of Sandy, literally the whole Northeast US and adjacent southern Ontario and Quebec will see the potential for damaging wind gusts. As Sandy nears the shoreline, model guidance is indicating a belt of 100+MPH winds about 5,000 feet above the ground to the north of the center of circulation. Due to the stable nature of the airmass, this won’t mix to the ground as efficiently as in normal hurricanes, however to the north of Sandy’s landfall point, hurricane force wind gusts may occur well inland. The biggest risk for hurricane force wind gusts occurring well away from the ocean will be over Southern New England and New Jersey. Areas near the landfall point of Sandy will without a doubt see hurricane force wind gusts along the shoreline.

Farther inland, the pressure gradient will be very tight, and the winds about 5,000 feet above the ground will blow at over 80MPH over a large area. Here, wind gusts to 60+MPH appear likely. Locally stronger winds may occur over the higher elevations of PA and VA and downwind of these higher elevations, assuming the low tracks to the northeast after a NJ landfall.

The pressure gradient will be strong back to the Great Lakes, where tropical storm force wind gusts will be possible.

In general, in the green area, where wind gusts will be “low end tropical storm force,” isolated to scattered power outages may occur. In the yellow area, where wind gusts will be “high end tropical storm force,” more widespread tree and power line damage will likely occur. In the red, where I think hurricane force wind gusts are most likely, power is expected to go out, and some structural damage may occur.

Should the expected strength/track of Sandy change, I will update this wind gust map.

Due to the cold air that will wrap in to the west of Sandy, very heavy mountain snow is expected as the tropical moisture is thrown back into the cold air. The heaviest snow should occur over the central Appellations from southwestern PA south through WV and far western VA. Here, several feet of wet snow may fall.

Elsewhere, there may just be enough cold air over the eastern Great Lakes and upper Ohio Valley for some snow as Sandy pushes inland. However, this scenario is much more uncertain, so for now will paint in a “low impact” snow event where snow is most likely in these areas.

As Sandy moves northwestward, it will bring a large slug of tropical moisture. A large swath of 3-6”+ rainfall amounts will occur, and flooding will be possible. Look at the above map to see what the Government’s Hydrometeorlogical Prediction Center expects for rainfall in your area.

I will have another update as details become clearer Saturday Night or Sunday Morning.

This entry was posted in Pattern Discussion, Storm Forecasts. Bookmark the permalink.