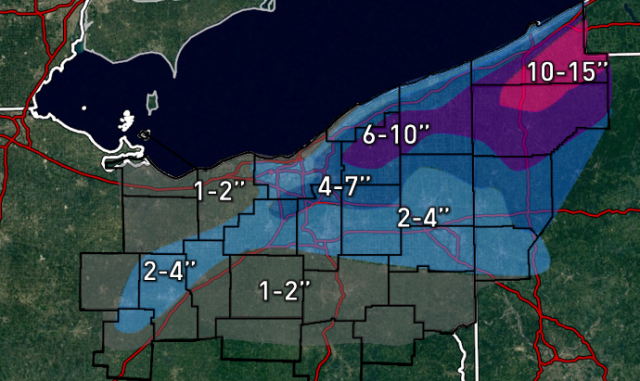 Lake enhanced snow will start firing up late  Thursday afternoon and intensify Thursday evening. The snow will be heaviest through early Friday morning before tapering down to scattered and mainly light snow showers by Friday afternoon. The snow will completely end Friday evening. The heaviest snow will be in the higher terrain in the “primary snowbelt” in northern Geauga, far southern Lake, and inland Ashtabula Counties. Because of the wind direction and abundant moisture, some decent snow is expected in the higher terrain farther south and west in the “secondary snowbelt” in southern Cuyahoga, northern Trumbull, northern Portage, northern Summit, and northeastern Medina Counties. Even away from the snowbelt, good moisture and help from Lake Michigan could contribute to some plowable snow in the higher terrain just northwest of I-71 down to near Mansfield. Locations near the lake will generally see less snow. It will be windy enough for some blowing and drifting snow issues.  This snow has the potential to affect the Friday morning commute across a large chunk of Northeastern Ohio, even outside of the normal “Snowbelt.”

A fairly deep upper level trough will take on a negative tilt over the eastern Great Lakes and New England Thursday night into Friday, allowing a low pressure to bomb out over eastern New England.  This whole process will allow cool air to move across the Great Lakes, and keep a rather deep and moist cyclonic flow going over the Great Lakes through Friday.  Although the airmass won’t be extremely cold and the lakes aren’t running as warm as previous lake effect events, the abundant moisture should allow some decent snowfall to occur downwind of the Great Lakes to end the week. 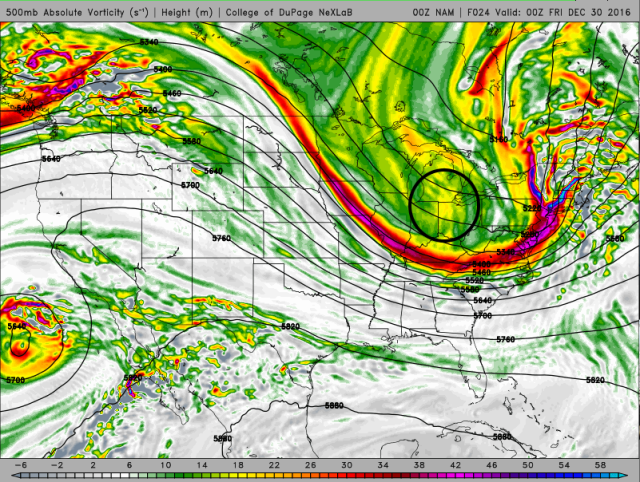 A little vort max may graze extreme NE OH mid Thursday afternoon…lake to 850mb temp differentials of only 11-12C and instability/moisture extending to only 4-5k feet will limit how much snow can get going Thursday afternoon.  I could see a few flurries in the primary Snowbelt Thursday afternoon, but not much more. 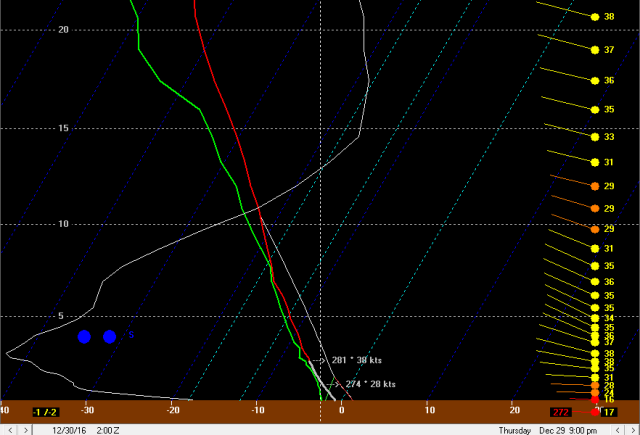 Note that the instability, while not extreme, extends to around 10k feet, with plenty of moisture past 10k feet as well.  There is upward motion (the white line) extending through all of the dendritic growth zone on the soundings Thursday evening, so once temperatures fall a couple of degrees below freezing snow to liquid ratios should improve.  The flow on this sounding is a bit strong in the lowest 10k feet, with a deep layer of 30-40 knot winds, and there is a bit of shear.  This will likely prohibit a strong single band from forming; however, large scale lift from the vort max, some moisture from southern Lake Michigan, a deep layer of moisture and instability and an OK flow for upslope to start developing should allow moderate to locally heavy snow to quickly develop Thursday evening as the first vort max moves in and allows conditions to become more favorable for snow. 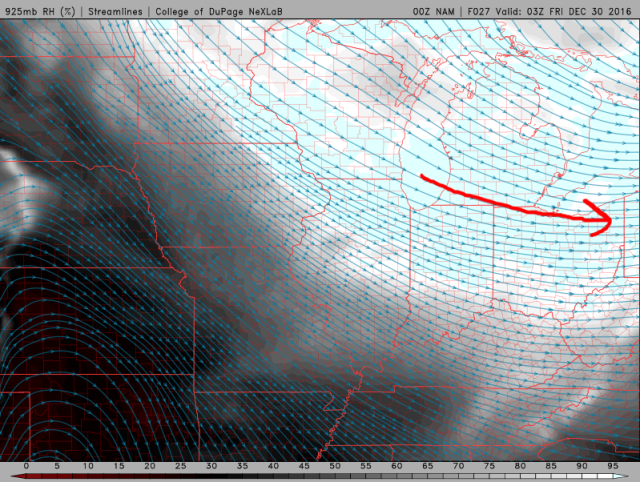 The low level flow will be in the 270-280 degree neighborhood Thursday evening, which does favor the bulk of the Lake Erie moisture affecting northern Geauga County east, and this is where the heaviest snow will likely take place Thursday evening…particularly in NW PA where there’s a longer fetch over warmer waters and more terrain to really enhance the orographic lift.  With that said, the low level flow will still carry Lake Michigan moisture into the west side and Cleveland metro Thursday evening, so this combined with the abundant synoptic moisture and some lift will likely allow snow showers to develop over the secondary Snowbelt Thursday evening as well…it may not be quite as heavy due to less help from Lake Erie, but this isn’t a pure lake effect situation where you’re often dry outside of the main bands.  The cold air advection regime allows a deep layer of conditionally unstable lapse rates to develop, which when combined with abundant moisture from the trough itself and Lake Michigan will allow half decent snow to develop south of the best Lake Erie enhancement…particularly in the higher terrain where upslope will occur. 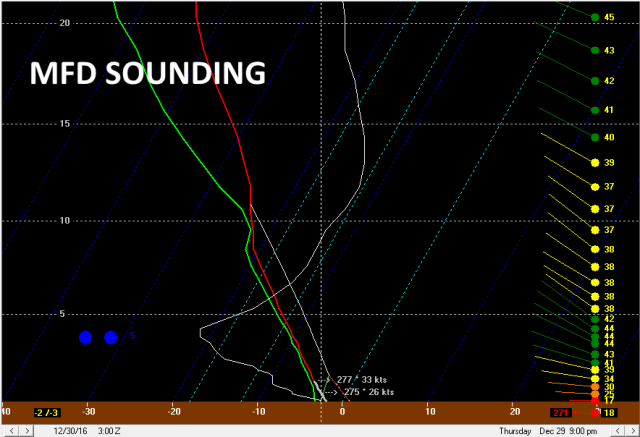 Although the flow doesn’t quite bring Lake Michigan moisture down into the central highlands Thursday evening, the ambient low level moisture combined with a deep layer of conditionally unstable lapse rates is still expected to develop…this, combined with modest upward motion with the vort max and upslope should allow light to moderate snow to develop over the central highlands Thursday evening as well.  The surface winds don’t quite hit the axis of the highest terrain at 90 degrees, but it should still be enough to get snow going.  The best upward motion here is located below the DGZ on this sounding, but the steep lapse rates and moisture do extend through the DGZ, so the weak convective processes could occur through the DGZ and allow for fairly high ratios in any upslope in the central highlands by mid to late Thursday evening. 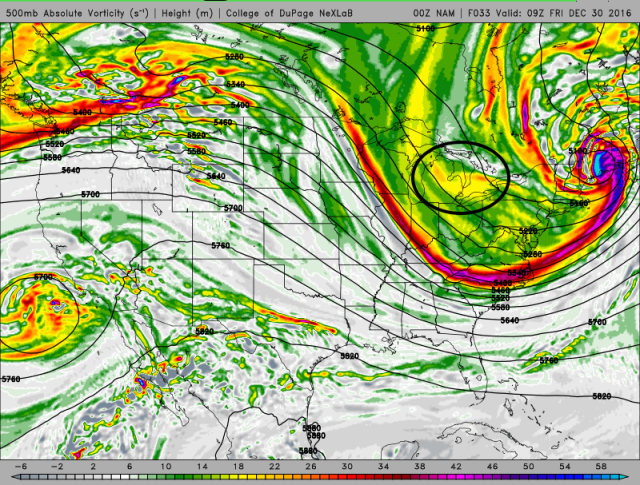 The snow may abate a little bit for a brief time between 1am and 4am Friday as we get a weak period of sinking air behind the first vort max.  Lake effect conditions continue to slowly improve so that may offset the weak larger scale descent…I doubt the snow stops but it may briefly lessen in intensity.  This potential lull will be short lived as a more potent vort max approaches and provides for another period of some large scale ascent between 4am and 10am Friday. 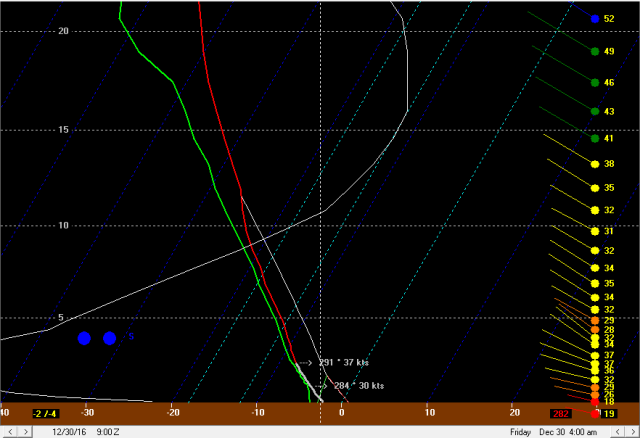 Lake effect parameters remain largely decent as this second vort max drops in, with instability and moisture still extending to over 10k feet.  The wind speed and shear are still a bit strong which will likely prohibit a very intense band from forming, however the synoptic moisture/lift and decent enhancement from the lake will still likely result in moderate to heavy snow, particularly in the higher terrain.  The winds do gain a more NWrly component early Friday morning as a surface trough pushes through, which will likely allow the “heaviest” snow to expand into Cuyahoga County and likely parts of the surrounding secondary Snowbelt as well, as the best Lake Erie enhancement shifts south. 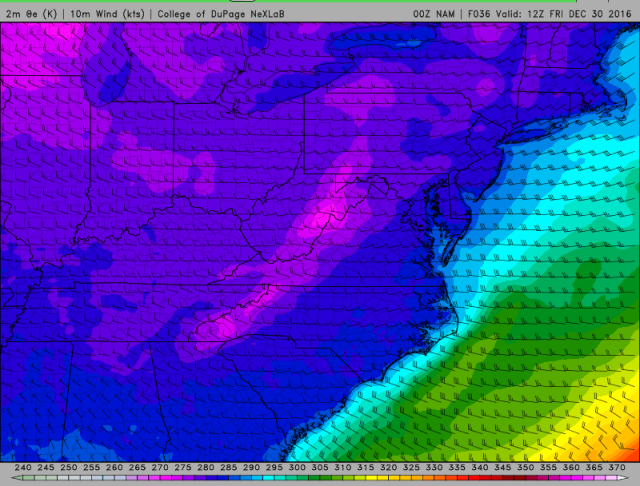 There may not be a sharp surface trough early Friday with the wind shift, and instead a more gradual shift.  There may be a brief increase in convergence as the winds shift, but I doubt a big band will develop and swing south.  Regardless, the favorable conditions for enhancement and upslope suggest good snows will continue into Friday morning, especially in the higher terrain of the primary and secondary Snowbelt. 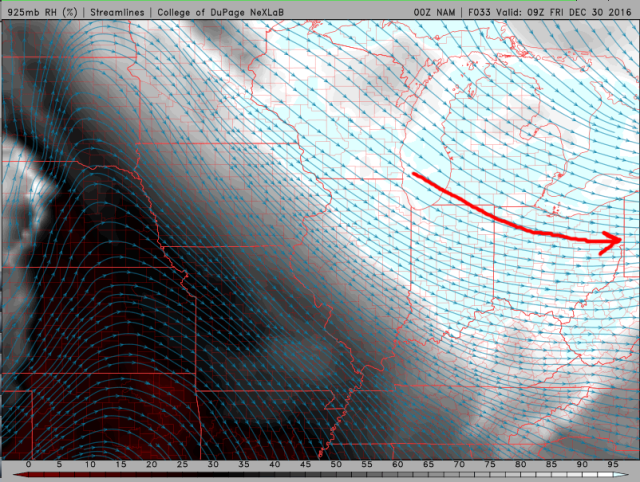 With the winds gaining a more northerly component early Friday morning, the connection should shift south of the lakeshore and Cleveland metro and hit the central highlands.  Because this is occurring during a period of enhanced large scale ascent from the vort max, and because there’s not only a Lake Michigan connection but also the low level winds hitting the axis of the higher terrain at nearly a 90 degree angle, there’s definitely a risk for some pretty good snows for a few hours in the central highlands Friday morning. 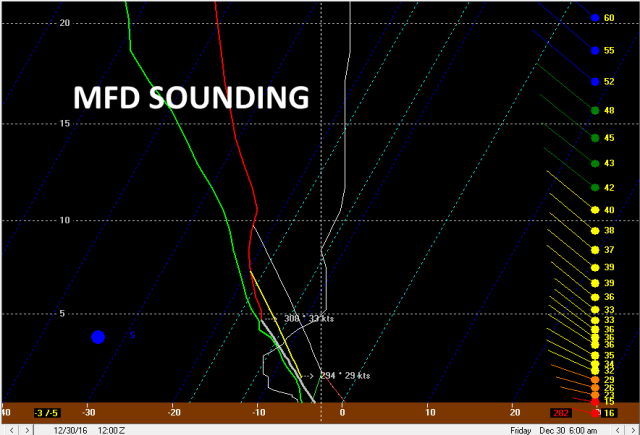 Forecast soundings from MFD for early Friday still show moisture and CAPE through the entire DGZ, with the flow hitting the terrain at nearly a right angle.  When factoring in the modest lift with the vort max and a likely Lake Michigan fetch, the conditions do appear ripe for another decent period of snows in the central highlands wherever the Michigan fetch sets up Friday morning.  Decent snow showers could continue well east across the rough terrain south of route 30 and produce up to an inch or two in spots, making for a rough Friday morning commute in locations well outside of the normal Snowbelt.

Synoptic lift goes away and moisture depth decreases Friday afternoon as the trough pushes east.  Lake effect conditions remain OK downwind of Lake Erie, so with a WNW wind some snow showers will likely continue across the Cleveland metro and primary Snowbelt…but nothing extreme.  Winds turn W and then SW Friday night, but with inversion heights crashing I highly doubt there’s much if any attempt at activity re-organizing on the west flow Friday evening. 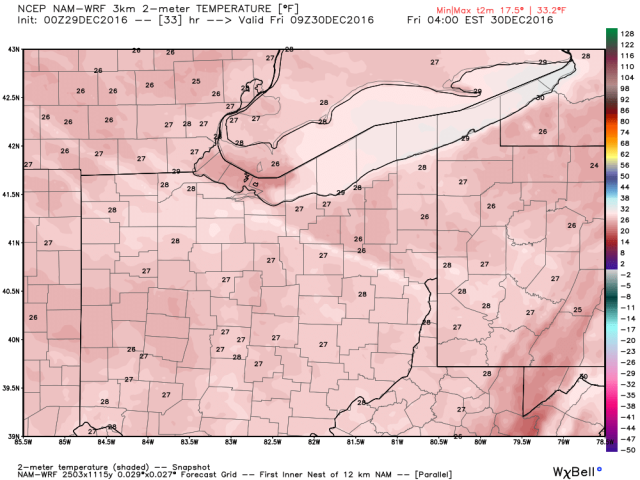 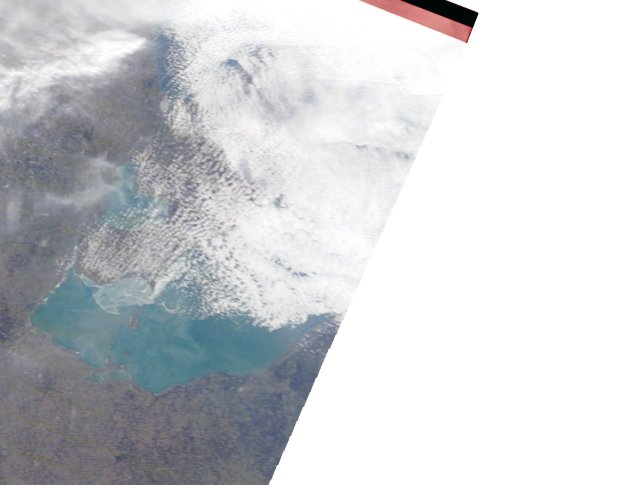 A note about the hi-res models…there is no ice cover over western Lake Erie except for near the Canadian shoreline, and even there it’s slushy.  The hi-res models show a little bit of clearing and radiational cooling over the ice Thursday night into Friday morning.  Satellite imagery showed that there isn’t ice here (and even so there is still some moisture and heat flux through ice), so these models likely are erroneously light on snow amounts from Cuyahoga County southwest into Lorain and Medina Counties due to incorrectly shaving like 60 miles off the fetch and then making that air colder than the air over the surrounding land.

As for amounts…the heaviest will likely be in the higher terrain.  Because of a longer fetch and longer duration of flow off of Lake Erie, the primary Snowbelt higher terrain should see more snow than the secondary Snowbelt.  NW PA should see more than the NE OH Snowbelt due to a longer fetch and even higher terrain yet.  Given the duration of heavier snow in NW PA (a good 18 hours), I still expect max amounts to exceed a foot there in the higher terrain.  In Geauga and Ashtabula Counties (particularly the higher elevations in northern Geauga County), I figure max potential amounts are probably in the 10-12” range…with widespread amounts of over half a foot given the duration of decent snows and what should be 15:1 ratios or so.  The fetch off of Lake Erie doesn’t quite go into the higher terrain in eastern Cuyahoga initially and takes a bit longer yet to hit the higher terrain in the secondary Snowbelt, and the fetch for these areas is over waters that are a few degrees colder, so rates may take longer to get moderate to heavy and probably won’t max out quite as heavy as farther east.  Even still, a good 12 hour or so period of decent snows could yield max amounts of 6 to 7” or so in the secondary Snowbelt, with widespread amounts of at least 4”.  Given some upslope starting Thursday evening and a likely Lake Michigan connection late Thursday night into Friday morning for at least a few hours, I do think the higher terrain all the way down to Mansfield and maybe even into northern Morrow County could see a few inches in spots.  I painted in 2-4” here for now, although there could be locally a bit more if the Lake Michigan connection sets up over a certain area and doesn’t move a ton.  With continually shifting winds, the latter scenario doesn’t seem particularly likely.

With a WNW flow for a while late Thursday night into Friday morning, we’ll have to watch for a shore parallel band developing and moving into the secondary Snowbelt in Lorain, Medina, and Summit Counties.  Winds are still a little on the strong side with a bit of shear during this timeframe, and as I mentioned I doubt a big band swings into these counties from the north as the winds shift, so I’m leaning against this scenario…but if it did occur, local amounts may exceed my 6-7” max in the higher terrain of these counties. The lakeshore is tough, especially from Lake County on west. I went 1-2” for these areas.  With the expected lack of big bands, I think you’ll need some terrain to get decent snows.  With that said, sometimes WNW flow lake enhanced events feature frictional convergence over Lorain and Cuyahoga Counties that can intensify snow in these areas, so I’m not entirely sold that some of the lower elevations in the northern portions of those counties can’t get 3” or so…but the highest amounts will certainly be confined to the higher terrain farther south and east.  With that last bit said, I did put most of Cuyahoga into at least 2-4” outside of the immediate lakeshore.