Pattern Shift Beginning to Occur Over North America; What are the Implications?

A current look at the large scale pattern reveals that although the pattern is “zonal,” or flat across much of the US at this time, that heights continue to rise over the Aleutian Islands into the arctic circle. This is dumping a lot of cold air into Canada and will continue to do so over the next week, and this cold air is going to try to come south.

A current look at the teleconnections, which can be done off the map, shows that:

-The NAO is positive right now, with a large upper low and very fast flow over the North Atlantic. This corresponds to higher heights/ridging over the eastern US, which is occurring at this time.

-The AO is neutral right now, which means arctic air isn’t any more or less likely than normal to be displaced south.

-The PNA is negative right now, which favors troughing over the western US and ridging over the eastern US. This again is occurring right now.

-The NAO is likely to fall for the last week of November into December, due to tropical forcing.

-The AO forecast is highly uncertain due to the strength of the polar vortex in the stratosphere conflicting with the expected location of tropical convection in the coming weeks.

-The PNA is forecast to stay negative through the end of November, but tropical forcing argues for a rise in the PNA near the beginning of December.

The latest telleconnection forecast for the NAO, AO and PNA off of the GFS ensembles shows some semblance to this idea as we head into the first couple days of early December. However, there is still much variability between the individual ensemble members on exactly how each telleconnection responds over the next two weeks.

A latest look at global tropical convection shows that the strongest convection near the equator is occurring west of the dateline. This continues to, as discussed in my previous blog, result in the subtropical ridging being stronger north of these areas, over the western Pacific, due to the latent heat released by the convection. This results in the strongest jet stream to be focused over this area before weakening near the dateline, resulting in storminess in the northwest/north central Pacific and ridging east of the storms near the Aleutian Islands:

Thus until the MJO tries propagating eastward, we will not see a breakdown of the Aleutian ridging and –PNA pattern. 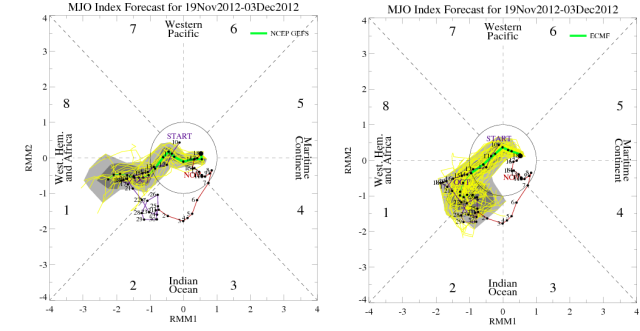 The GFS and Euro and their ensembles are still insisting on the MJO breaking into phase 1 the last week of November, which would signify convection east of the dateline. An intuitive approach here indicates this would slowly break down the Aleutian ridge/-PNA pattern:

As convection shifts east with the MJO, the jet streak would weaken in the central Pacific as opposed to western Pacific, resulting in cyclones occurring near the Aleutian islands. The ridging east of the cyclones/storminess would occur near the western US coast, which would be a near reversal from the current Pacific pattern.

The Global Wind Oscillation continues to rise to more positive phases, and is nearing phase 5. This illustrates that the upper level winds will be stronger closer to the equator, which is more typical of an El Nino. In addition, as can be seen by the explainer graphic on the left, phases 5 and 6 of the global wind oscillation tend to indicate that convection near and east of the dateline is likely.

Given we have seen a significant warming of waters in the central equatorial Pacific in recent weeks, this transition to a more El Nino like GWO makes sense. Given the transition of the GWO to more positive values (phases 5-7 are positive, 8 and 4 are neutral, 1-3 negative) in tandem with consistent model predictions of the MJO trying to propagate east the last week of November into December, I believe the forecast for the PNA rising and potentially becoming positive in early December that I put out remains logical.

Now, this may be quite an interesting prospect, as the ridging near the Aleutian Islands is quite strong, and may take some time to weaken.

As we take a look at the stratospheric vortex, it, as expected, remains fairly strong, especially in the upper portions of the stratosphere. This will make it somewhat difficult to see strong blocking in the NAO and especially AO regions in the short term.

As we head forward to the forecast for November 28th in the lower portions of the stratosphere, the European model does shows a significant warming occurring over the eastern hemisphere with the vortex becoming stretched and compressed a bit. However, this is not a significant weakening of the vortex, yet.

However, the vortex will not be over powering over N. America or the N. Atlantic over the next week and a half, so this combined with the expected MJO propagation does favor a negative NAO. How negative it gets remains in question. If the NAO goes negative with a strong Aleutian ridge ongoing the polar vortex in the troposphere would likely be split, resulting in quite cold air getting close to or in the northern US.

A day 10 forecast comparison between the GFS and European ensemble means show some similarities and differences:

-With the NAO, the European ensembles, on the left, is slightly stronger with the height anomalies over Greenland than the GFS ensembles.

-With the EPO/Aleutian ridge, the GFS ensembles on the right are much slower in beginning to weaken the block than the European ensembles.

-Either way however, both models show a bit of a ridge bridge occurring across the North Pole between the two blocks, displacing the polar vortex and focusing a trough off the western US coast and another trough somewhere over the east, with some very cold air to play with. Both models also show lower than normal heights off the western MX coast, signifying potential sub-tropical jet energy in play.

So, my call on the pattern over the next two weeks:

-Aleutian ridge begins weakening in about 10 days, maybe slightly sooner. NAO goes negative in a week to ten days. PNA likely takes about two weeks to go positive but I do expect a +PNA with western US ridging to develop in the first week of December.

-Uncertain as to how long NAO stays negative. MJO argues for a –NAO through the first week or two of December, however.

This entry was posted in Pattern Discussion. Bookmark the permalink.