A current look at the upper level pattern over the Northern Hemisphere reveals that ridging persists across a good portion of the central and eastern US. An upper level low remains in place near Iceland, however this upper low is quickly weakening and moving out of the picture. As this happens ridging currently nosing to near the Davis Strait will move over Greenland and help the NAO go negative. An upper level low pressure remains pinned south of the Alaska ridge which will continue to build over the coming days. As this upper low drifts south it will allow weak ridging to also develop over the western US into early next week.

At the same time, a potent piece of energy that is crashing into the Northwest US in the above image will move east, and beat down the ridging over the eastern US. This will result in a significant pattern change over the eastern and central US this weekend into next week.

A look at the projected pattern for Saturday morning off the European model ensembles, and it is evident that a significant upper level trough is expected to develop over the eastern US, ushering in much more winter like temperatures and some snows downwind of the Great Lakes and the favored upslope regions in the Appalachians.

At this point, the aforementioned –NAO is beginning to take hold, however it is not in the classic position yet and the NAO is technically near neutral at this point, thanks for lower heights over Greenland. Weak western US ridging has developed in response to the weak remaining upper low pinned south of the Alaskan ridging early this weekend. Cold air continues to also poor into western Alaska due to a cross polar flow created by the Alaskan ridging. This will set the stage for a second blast of cold air and potential storm threat over parts of the eastern US early next week, as mentioned in my previous post.

As we roll the European ensembles forward to Tuesday morning, one can see that the NAO is expected to be strongly negative by this time, although focused slightly east of Greenland. In addition, although Alaskan ridging is expected to continue, the models now show weaker ridging than previously thought over this region. This in turn allows the polar vortex to get pushed a little bit farther west than previously thought and not quite as far south.

On the above image an active sub-tropical jet is quite evident, with lower than normal heights extending from off the southwest US coast into the southeastern US. With the polar vortex potentially a bit less suppressing and farther west than initially thought, this may give create enough room for a storm to wrap up and cut into the Great Lakes Tuesday-Wednesday.

This threat is still a bit far out and although I was initially leaning towards a more suppressed storm track east of the Great Lakes, the positioning of the polar vortex makes a Lakes cutter more likely early to mid next-week. The models are still all over the place with this potential system, so it is too early to make a determinant call, but for now I’m leaning towards a weak storm tracking into the upper Ohio Valley with potential snow from the lower lakes east into parts of New England, although confidence in this is low. 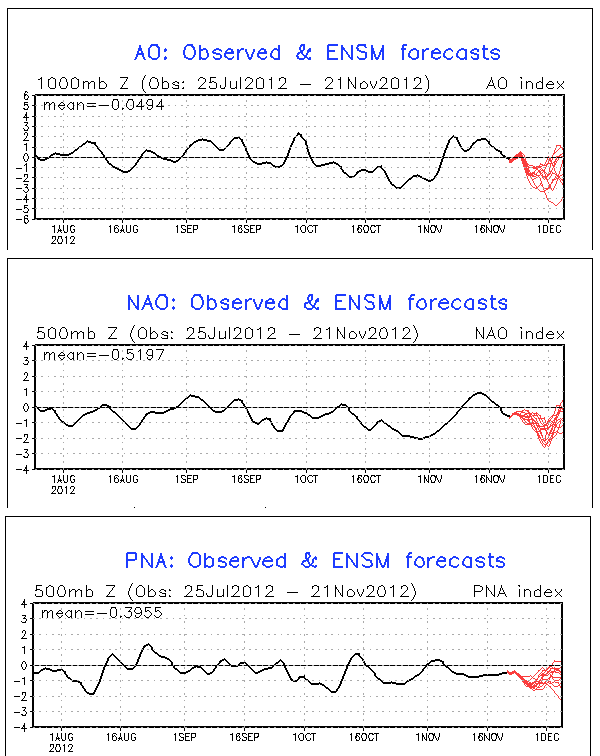 When looking at the forecast telleconnections for early next week, the NAO and AO are expected to be negative, with the PNA still negative as well heading into early December. This supports a trough over the northeastern US and on the west coast of the US with some ridging trying to build into the central US. This leads to the forecast idea of a shot of cold air from the eastern Midwest points eastward into the Ohio Valley and Northeast to end next week behind any storm that comes through, which jives with current model predictions:

However, with the troughing along the west coast flooding the central and western US with Pacific air and raising heights in this area, it appears as though the trough will become focused right along the east coast, which will favor storms riding into Nova Scotia, if they occur. Thus, after the mid-week storm threat next week, it is unlikely that the eastern US (or anyone except for the mountains in the Northwest US) will see any significant snow threats to end the month of November.

When looking at the telleconnection forecasts, there are a few trends into early December:

-The PNA will slowly try to trend positive; however it is uncertain if this will happen.

-The NAO may try to rise in early December.

-The AO forecast is highly uncertain as we head into early December.

Note how, as days ago, low pressure systems are currently rising up towards Japan and eastern Russia, pumping up the ridging into the Aleutian Islands and points north, focusing troughing near the west coast of the US. 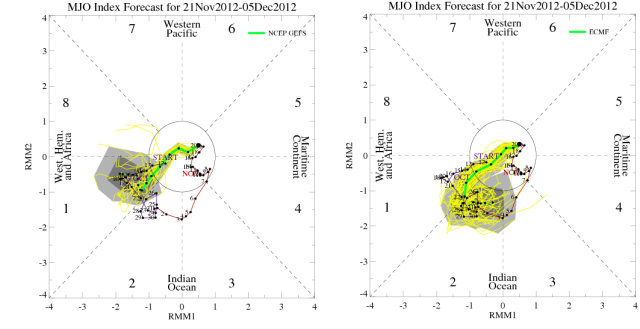 The MJO is still projected to pulse and propagate east shortly, heading through phases 1 and 2 next week and the week after. The GFS and European remain consistent and in generally good agreement on this MJO pulse occurring in the mid-range, and the GFS for mid-week next week does show higher heights aloft associated with ridging east of the dateline, trying to enhance ridging over the western US:

Note how higher than normal heights are now squarly east of the dateline. This is trying to enhance the flow off the west coast of the US (south of Alaska) and push surface cyclones into NW Canada and pump up ridging on the western US coast. However, note how the polar vortex over Russia is so strong that it is still focusing a very strong jet over the western Pacific that breaks and results in ridging into the Aleutians.

In my previous post I mentioned it would be curious to see how this MJO pulse modulated the Pacific pattern, because it would try to reverse what is currently occurring. The early answers look like the western Pacific pattern, or WPO, will remain “negative,” meaning below normal heights over northeastern Asia and ridging into the Aleutian Islands, which telleconnects to troughing on the west coast of the US, and ridging over the central US.

Until we can dislodge or weaken this polar vortex, we may see this type of Pacific pattern continue, despite the MJO.

In fact, the European ensembles at the end of their run and the GFS ensembles in early December do in general show a gradual weakening/displacement of the eastern Asian polar vortex:

So, although this is a long way out, it jives with the stratospheric warming in that area. This may allow the MJO to do its thing and force ridging over the western US as we head into the second week of December.

In addition, with tropical forcing expected over the east Pacific or central America in the week two timeframe, that encourages cyclones over eastern North America, which favors a –NAO downstream. So, I do think the PNA will trend positive, but it will likely take until the second week of the month for that to happen. I believe the NAO will predominantly remain negative through mid-December due to tropical forcing being located over the eastern Pacific, which is supported by the current GWO heading towards phase 6. The AO forecast remains more challenging due to the strong stratospheric vortex; however, if strong blocking continues on both sides of North America we likely will not see the AO trend back to positive values until mid-December.

11/26-12/2: Troughing takes over in Northeastern US after mid-week. Potential storm threat from eastern lakes to New England as this trough pushes east. West coast remains cold and wet. Central US starts cold early week but moderates towards the weekend.

After mid-month: The pattern may break down if the MJO pulse continues east, which seems possible. As blocking over Alaska weakens, the polar vortex may retreat back north and allow colder air to stay bottled up north.

This entry was posted in Pattern Discussion. Bookmark the permalink.