The Tropics appear to be “heating up” in the North Atlantic and I have a few moments of free time, so let’s chat…these thoughts are just mine and shouldn’t be considered official or used for any important decisions…

A non-tropical low pressure system that emerged into the waters off of the Southeastern US coastline over the weekend has gradually acquired tropical characteristics while spinning over the waters near the Gulf Stream. A Hurricane Hunter aircraft investigated this low pressure area this afternoon, and found that there was a well-defined surface low pressure with winds of around 30 knots. Radar and satellite data (satellite above) shows that while there is a well-defined surface low pressure, the system is convectively challenged in the northern semi-circle, which is causing the National Hurricane Center to hold off on designating this system as a tropical depression. However, the Hurricane Hunters found that surface pressures are falling with this system (down to 1009mb during their last pass), and all data says that this surface low is well defined and tropical, so any increase in convection will result in this becoming a tropical depression. I’m expecting that to happen by Tuesday morning.

Here is a look at extrapolated sea level pressure and flight level winds (left) and a map of the flight and winds (right), courtesy of Levi Cowan (http://www.tropicaltidbits.com/recon/):

There are two main factors that have inhibited development into a tropical cyclone thus far. There has been moderate northerly shear from an upper level high pressure system centered to the west of the low pressure system, and dry air in the northern semi-circle of the system that have both combined to keep convection to a minimum near and north of the surface circulation. A recent water vapour image, with satellite estimated precipitable water values overlaid, shows that the air north of the low pressure center is much drier than the air near the circulation. The moisture pouch associated with the system is actually quite small. This drier air to the north is getting entrained into the circulation by the northerly wind shear: 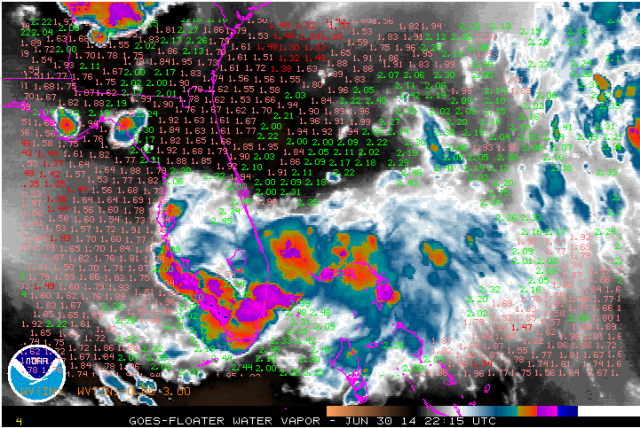 In addition, the persistent northerly shear has caused the vortex of the system to fail to become vertically aligned. When plotting the 850mb (about 5000 feet above sea level) vorticity on top of the satellite imagery, it is clear that the mid-level vortex is located south of the surface vortex. This is also contributing to the bulk of the convection with 91L remaining south of the surface center:

So essentially, at this point in time we have a well-defined low pressure system, however shear and dry air are causing the system to feature a rather disheveled appearance, which is preventing the NHC from classifying it as a tropical cyclone. However, weather weenies can breathe a sigh of relief, as this northerly shear is expected to relax soon, per essentially every important model (ok, just the GFS and Euro):

By Wednesday evening, the 18z GFS shows that the upper level winds (barbs) over 91L (the yellow blob just east of Florida) will be much lighter. In fact, the upper level winds over the invest are forecast do become divergent. This suggests that shear should relax over the next 24 hours, and that the upper level winds will help ventilate the system, promoting continued convection with it. This all means that the vortex of the system should become more vertically stacked over the next day, which means convection would become better co-located with the center, likely earning it tropical cyclone status. This could happen as early as tonight, and I believe is almost a lock to happen at some point on Tuesday at the latest. If this becomes a tropical storm, its name would be Arthur.

WHERE WILL THIS GO?

91L has been slowly drifting south to southwest over the past day, and is now close enough to the Florida coastline that some outer rain bands are affecting the state. The system is currently being steering by high pressure located to the west. The high is trying to bubble into parts of the southeastern US, and the clockwise flow around this high is what has been nudging the low south to southwest:

If 91L remained weak, it would continue to be steered by the low level flow. However, I am expecting to it become a bit stronger tomorrow, which means it is appropriate to look at a slightly higher layer to determine what will steer this system:

By the time we hit Tuesday evening, assuming the system becomes a bit more vertically stacked than it is right now, there would be a few factors influencing 91L’s movement. There would be the same high pressure in the Gulf of Mexico, however a trough will begin building in from the north, and there will be a stronger high pressure to the east of the low, which may work with the trough to cause the storm to stall and eventually begin recurving in a couple of days. By the time we hit late Wednesday, you can definitely see that the trough moving in from the northwest will likely begin turning our low pressure system to the north and then northeast:

Essentially, it seems likely that 91L will continue drifting south to southwest over the next day…into Tuesday…before essentially stalling/gradually turning more west and eventually north/ through Wednesday…before beginning to gradually accelerate to the northeast by Thursday and Friday. Most of our hurricane models show this general motion over the next few days: 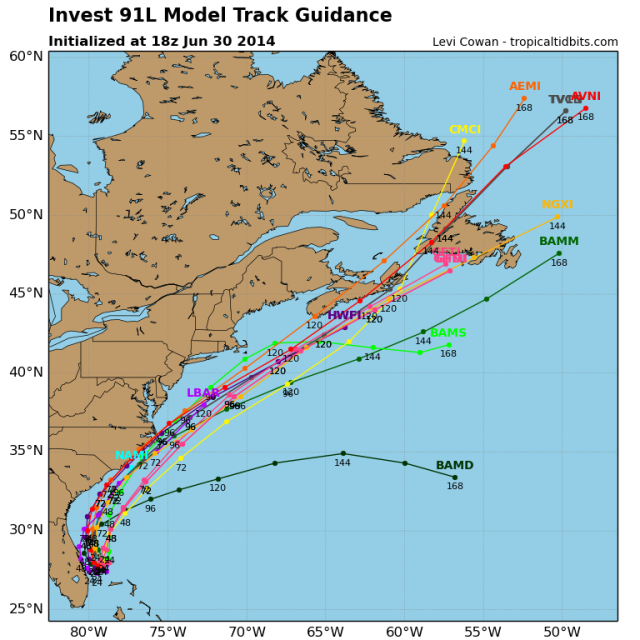 Based on all of the above, there are two areas that stand a chance at a “direct landfall” (center moving overhead): The Atlantic Florida coast, and North Carolina, and an outside chance in South Carolina. Other states may see indirect impacts such as increased rain and surf.

Most of the ATCF models above keep 91L just off the Florida coast, however it is very close. The surface circulation was moving southwestward towards the coast earlier today, but appears to have stalled. It is possible that our surface center will jump to the south or southeast tonight towards where the better thunderstorm have been focused this afternoon. If this happens it may be affected less by the low level high pressure trying to build to the north, which may ultimately keep it off the Florida coast. If the surface circulation doesn’t relocate tonight, it may move into eastern Florida at some point Tuesday or Wednesday. Given radar trends during this writing, I’m leaning towards a center re-location, which would likely keep the system just east of the Florida coast, however it may still get close. Some heavy rains and breezy conditions are possible along the Atlantic Florida coast through Wednesday.

As for a potential Carolinas impact, that is farther down the road and less certain. All models agree that the trough currently located over the upper Midwest will move east and help recurve 91L, assuming it can develop any further from where it is now. However, how quickly it recurves will determine if it can directly impact the Carolinas or not on Thursday and Friday. The GFS and European ensembles both show above normal 500mb heights across the northwest Atlantic and over the Western US, and both show the trough taking on a bit of a negative tilt over the Ohio Valley on Thursday. This may allow the western side of the guidance envelope to win out, which would take any potential tropical cyclone towards North Carolina Thursday into Friday. The Euro ensemble means show this, with the mean low pressure right over the Outer Banks Friday morning:

It’s still very far out (considering a tropical cyclone hasn’t officially formed yet) to say definitively whether or not the eastern Carolinas may see a direct hit, however it is possible and needs to be watched.

It is difficult to determine how strong any system would be when it buzzes the Carolinas on Friday, as there are several factors that will ultimately impact its intensity. If 91L spends time over eastern Florida over the next day or two, it may not intensify as much in the short term. However, if the system can remain over water and become a bit deeper by Wednesday, the jet streak associated with the trough approaching the East Coast may really ventilate the system, which may allow for an uptick in intensity on Thursday and Friday:

Although the incoming trough would eventually shear the cyclone, the European model valid Friday morning shows how jet-streaks can temporarily ventilate tropical cyclones without shearing them, which often leads to a burst of intensification. IF 91L can strengthen some over the next 2-3 days, and IF it doesn’t do something unexpected and drift too close to land or even go inland, then it may become a hurricane by Friday as it passes over or east of eastern North Carolina. There are a few “ifs”, however the potential is on the table. 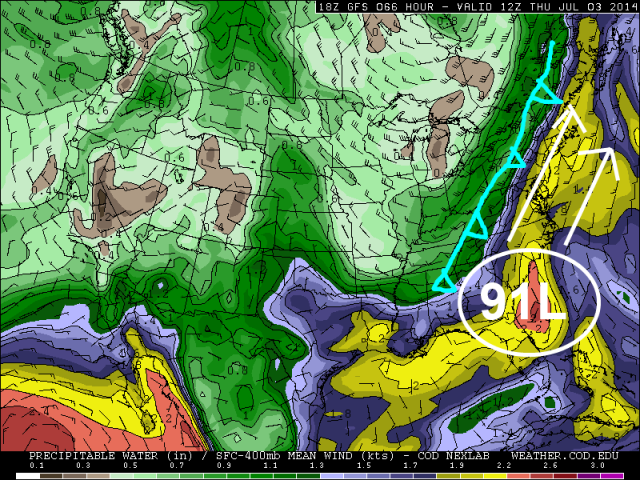 Here’s an informal look at what may happen with this system: 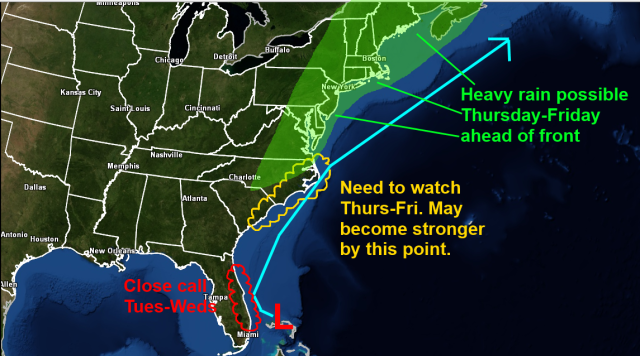