I haven’t had time to write much the last several days due to school. Snow is coming to Ohio tonight into Monday. Here is a map I made for Neoweather.com this morning for statewide accums: 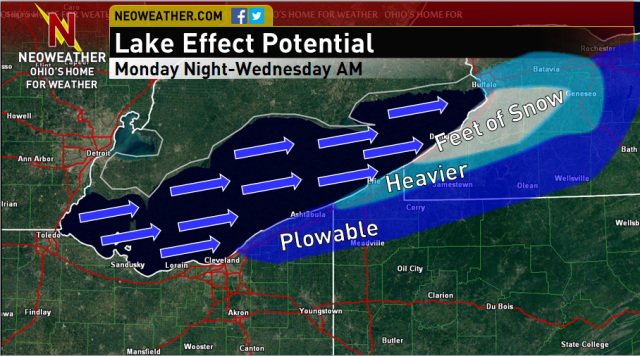 I am somewhat interested in the Tuesday evening timeframe for those plowable amounts to get into extreme NE Ohio. A surface trough is shown to go by and bring the winds around to a more westerly direction for a very short (like 6 hours) window Tuesday evening, which could push intense lake effect into Lake/Ashtabula/northern Geauga Counties for a time:

My general thinking is with extreme lake induced instability in this timeframe with very high inversion levels and good deep moisture is that even if we do only have a 6 hour window of good lake effect in the NE corner of the state that over half of a foot could fall in a small area in a short time frame. I don’t feel like there’s a lot of confidence here due to strong surface high pressure building in from the southwest trying to keep the winds off shore. The NAM, which did a better job with the wind direction for the lake effect event last week, doesn’t show the winds coming around towards the west quite as much as the GFS:

So, we’ll see if lake effect can clip the extreme northeastern corner of the state for a time Tuesday evening. I wouldn’t hold my breath for heavy amounts outside of the Ashtabula to Conneaut corridor, and even there it’s iffy in my opinion.

Later in the week, another re-enforcing shot of cold air will move into the Great Lakes and set off more lake effect snow. Parameters for this event look ok but not great like this upcoming early week event. However, the models are trying to show a more WNW wind, so even if this event is less intense, it looks to stand a better chance at possibly bringing plowable amounts to the Cleveland area points east:

As a note, Lake Erie will cool several degrees this week due to nearly record cold air for mid-November. This will limit the instability future lake effect events have to work with to an extent, although until the lake freezes significant lake effect can and probably will still occur.

Lake effect snow season started with a bang across northeastern Ohio on Thursday and Friday. A mega band with 2” per hour snow rates and thunder/lightning at time dropped over a foot on portions of Lake County on Thursday, with fairly well organized lake effect continuing from northern Lorain and Cuyahoga County points east Thursday night through Friday night. Based on spotter reports and some guessing to fill in the gaps, here’s an approximation of how much snow fell from the event:

Here was my forecast going into the event: 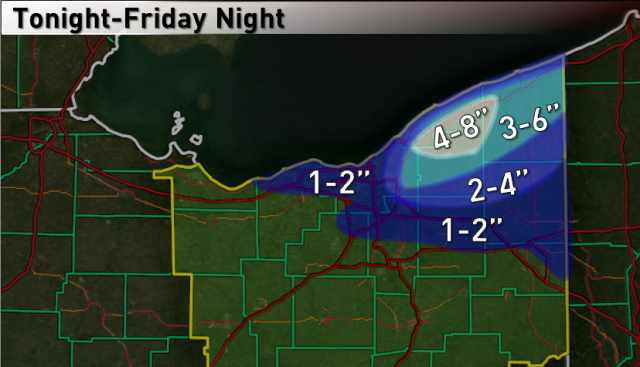 Whoops! That’s not good. This was probably one of my biggest lake effect snow busts ever. So, what went wrong? In my posts leading up to the event, I discussed how a surface trough moving through Thursday afternoon may enhance a good band across Lake/northern Geauga/Ashtabula Thursday morning into the afternoon. That certainly happened. I also mentioned a possible re-organization Thursday as surface pressures began to rise. That also happened. I also discussed generally favorable parameters for moderate to heavy snow Thursday morning into Friday evening. And oh, that happened. So, why did I forecast such low amounts?

I’m not sure, and I’m kicking myself. I had a lot of the right ideas, but totally blew the amounts. I’m not going to with the argument that I’ve read before of “I nailed the pattern but missed the anomalies” or some crap like that. If my forecast was wrong it was wrong. Lake effect is tricky and you will have a lot of forecasts that are off somewhere, somehow, but this was one of my worst busts ever. I feel like the big concern was I didn’t try to forecast amounts as much as I tried to worry about coming off as “too aggressive.” And that’s pretty aggravating to me. It basically comes down to if you expect good banding when lake effect parameters are generally favorable, especially multiple times over a multiple day event, don’t be shy on amounts. And also, don’t worry about what others think of your forecast…they’ll get there’s when you’re right 😉

The pattern looks less wintry for a week or so starting this weekend. I’ll post if anything fun comes up, and possibly on the lake effect this week if it warrants for northern Ohio.