A southwesterly wind flow this morning will focus a band of very heavy lake effect snow on western NY south of Buffalo. This afternoon, a surface “trough” will begin pushing south across Lake Erie, with winds becoming more WNW behind the trough. This will allow the band of heavy snow to swing southwest across the Northeastern Ohio Snowbelt. Extreme lake-induced instability, equilibrium levels above 10,000 feet and good moisture suggest that this band will contain 1-2” per hour snow rates as it goes, and drop a quick 2-4” of snow on most of the Snowbelt, with locally more in northern Ashtabula County where it may be more persistent. Behind this trough, a WNW wind flow suggests at least snow showers continuing across northern Lorain, Cuyahoga, northern Summit, Lake, Geauga, northern Portage, Ashtabula and Trumbull Counties through Thursday night. Lake effect conditions will gradually become less favorable starting Friday morning, and the winds will take on a more southerly component during the afternoon, likely ending the event by evening. Given a quick 2-4” snow band swinging across the area from Cuyahoga County points east, and additional snow showers behind it, accumulations of 3-6” are likely from eastern Cuyahoga points east, with locally more in northern Geauga/northern Ashtabula Counties. It is possible a more organized band tries to develop along the central lakeshore Thursday night behind the trough given a lake aggregate trough persisting downwind of Lake MI and surface ridging nosing in from the SW trying to maintain convergence near the central lakeshore through the night. If this occurs, parts of Cuyahoga/southern Geauga may see heavier snow totals than I have here…however, I’m not confident enough in this occurring to go “all out…”but I’ll watch for it.

An upper level shortwave will move across the eastern Great Lakes this evening. At the surface, the models all agree on a surface trough moving across Lake Erie late this afternoon into this evening as the shortwave goes by. This is a common scenario. Winds will be WSW ahead of the trough, keeping any heavy snow confined to northern Ashtabula County points NE through most of the afternoon, before expanding SW by evening. Behind the surface trough, winds will go WNW, which favors Cuyahoga County points east for better snows. Winds gradually go W Friday morning and more SW by Friday evening, gradually pushing the snow north on Friday. Instability will become extreme Thursday afternoon and evening, and then become more moderate through most of Friday morning. Instability then really falls off Friday afternoon. Equilibrium levels will range from 10-13k feet Thursday afternoon into early Friday, and then begin gradually dropping Friday morning. Moisture looks good Thursday afternoon and evening, with deep moisture to near 9-10k feet. Moisture remains favorable to around 850mb through Friday morning before drying out Friday afternoon.

As is always the case, band development, location/movement and intensity are all key. We already have our band, and it’s burying western New York. Bands tend to develop southwestward towards Cleveland as a surface trough begins moving across the lake. Most hi-res models show this Thursday afternoon, and we’ve seen it play out before many times. This may allow heavy snows into northern Ashtabula Thursday afternoon. Elsewhere, we’ll probably have to wait until the trough approaches the lakeshore Thursday evening to see better snows develop. When the winds take on a northerly component behind a trough, a good band along the trough usually occurs as far west as northern Lorain County (and obviously across Cuyahoga County). Although I think the trough will go through too fast for the band to maintain in any one spot for more than a couple of hours Thursday evening, the strong convergence along the trough along with the very good instability/decent moisture discussed above suggest 1-2” per hour snow rates with any band moving through as the surface trough tries pushing inland. This suggests at least a quick 2-4” for Cuyahoga points east with the surface trough passage. The 0z NAM shows a period of -20 ub/sec omegas in the snow growth zone at CLE as the surface trough goes by Thursday evening, which is a strong signal for intense snow rates of easily an inch per hour.

Behind the trough, the question becomes, as it often does, how quickly does the band push inland, does it weaken, does it re-organize, etc…? The NAM and HRW’s, to go along with a couple of the 0z BUF WRF’s show a more WNW flow behind the trough. The GFS shows a more NW flow. Given a lake aggregate trough likely persisting downwind of Lake Michigan Thursday night, and surface ridging building in from the southwest towards Friday morning, I’m inclined to believe the NAM’s winds more than the GFS. BUFKIT shows well aligned WNW winds on the 0z NAM behind the trough, which suggests lake effect may try to re-organize behind the passage of the trough across northeastern Lorain/Cuyahoga/Geauga Counties. The hi-res models are iffy on this, the ARW shows this occurring and shows 0.5-0.75” of QPF across a good portion of Cuyahoga County, while some of the 0z BUF WRF’s hint at it but don’t show as much QPF. This will need to be watched, as lake effect conditions suggest rates of up to 1” per hour could persist in any organized banding into Friday morning, before gradually dwindling and shifting northeast as surface ridging really builds in. Winds will be a bit stronger behind this trough than last week’s event, which may try to limit organization of snow behind the trough.

For amounts…went with a quick 1-3” in western Cuyahoga/northern Lorain as the trough swings by…a quick 2-4” from eastern Cuyahoga east…and a bit more in northern Ashtabula where the band may start affecting sooner. After that, went with additional light accums in northern Lorain/western Cuyahoga Thursday night into early Friday, and an additional 1-3” from eastern Cuyahoga east due to uncertainty over if renewed banding can form for several hours later Thursday night into early Friday. Another issue to consider is that 850mb temps of -16 to -18C are perfect for high snow ratios in a lake effect scenario, which may help areas not along the immediate lakeshore accumulate snow pretty well. In general, I actually feel like I’m being conservative on amounts here, mainly due to the short duration and small margin for error. 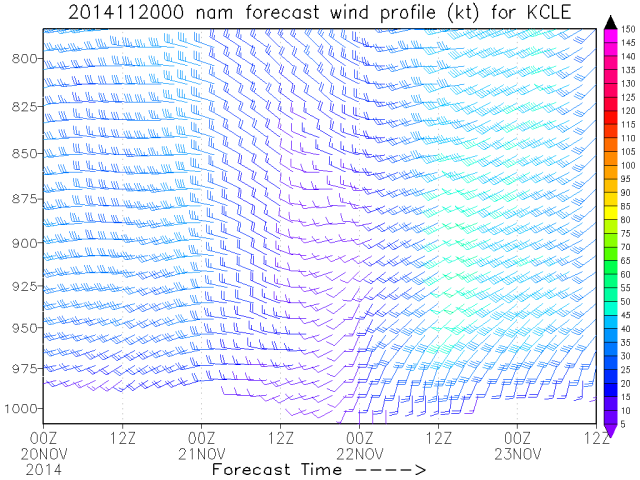 A BUFKIT “graph”…yellow line is the equilibrium level (45F water temp used)…scale is on the right…white line is lake-induced CAPE (scale is on the far left)…lines are winds between 910mb and 850mb (in degrees, scale is on the left):