A potent piece of energy in the jet stream has moved into British Columbia Friday evening. This energy will dive southeast into the High Plains and move southeast through the Ohio Valley as a “clipper” type system, bringing a swath of locally moderate to heavy snow with it. This swath of snow will move across Ohio, and this post will break down some of the forecast challenges associated with the snow forecast for this system as it moves through Ohio Sunday and Sunday night (the snowfall forecast map is at the bottom, for those curious).

There is a pretty decent clustering in our models on a low track Sunday evening near the Ohio River. As can be seen, there is some variation in this track, which will affect where exactly the swath of snow will go across Ohio. This track is generally too far north for snow in southern Ohio, but can be good for central and northern Ohio depending on how exactly large the area of snow associated with the system is.

A look at two of our main forecast computer models show two different snowfall ideas for Sunday and Sunday evening across the Buckeye State. The GFS model on the left is a little farther north with the swath of snow, but shows lighter amounts, generally 3-5” or so in its swath of heaviest snows. The GFS would get 2-3” of snow into Cleveland and 3-5” into Akron, with Columbus getting about 2” on the southern edge. The NAM model is a bit farther south with the swath of heavier snow and shows heavier amounts, in some areas as high as 6-7”. The NAM is also less generous with snow amounts on the northern edge and shows Cleveland struggling to see 1” of snow, with Akron getting 1-2”. The NAM shows an extremely sharp decrease in snow right across Columbus.

The question is, which model is right?

One way to determine this is to look at ensembles of these models…essentially, the model is run 20 times with different perturbations, to give you a possible range of solutions. In this case, the GFS ensembles are pretty supportive of the operational model:

The axis of heavier snows run generally along and north of I-70, with an inch or two getting into Cleveland.

Ironically, on the short range ensemble forecast system (essentially the NAM ensembles), their mean snowfall forecast is closer to the GFS in terms of placement…with a sharp cutoff south of I-70, and with amounts of 2” or so getting into Cleveland and northeastern Ohio. It should be noted that the snow along the Ohio River in southeast Ohio east into Pennsylvania is falling Friday night into Saturday and is separate from this system.

So, the evidence would seem to support the GFS and its slightly farther north swath of snow, right? Ehh, not really. Our computer models have been gradually shifting the swath of heaviest snows south in their last day’s worth of runs, and it’s possible a gradual south trend continues for the next couple of runs (they’ll eventually settle on a solution and hold steady with it). You can see this slow but steady south trend with every run of the GFS between Thursday evening and Friday evening…the runs start Thursday evening on the left, and occur every 6 hours, until Friday evening’s run of the model on the right:

The NAM model, along with other models, has also seen a similar trend south. The reason for this trend is evident when looking at the large scale weather pattern across the continent this weekend:

A large ridge of high pressure (all of the red) along the West Coast and a large trough (all of the blue) in eastern Canada into the Northeast US will cause our clipper to dive pretty far to the south. The orientation of the clipper on the above image suggests a continued southeast track into the Ohio Valley before the clipper will turn more easterly by the time it hits the east coast. Due to how far southwest the clipper is diving into the Midwest, and the large trough over the eastern portions of the continent, the more south trend makes sense. I don’t expect the swath of snow to trend any farther north in Ohio, and in fact the south trend may continue. The reason for this is the south trend really commenced as the energy that will turn into our clipper moved over North America, where weather balloons were able to provide a more accurate representation of the intensity of the clipper for our models. When the models had this better data they trended south. This clipper still wasn’t fully “sampled” for the Friday evening model runs (full sampling will occur Saturday morning), so some continued tweaks to the track of the low and location of the heavier snows may occur…although I think we’re zeroing in on the final solution with tonight’s runs. If anything, a slight south adjustment may occur with the models Saturday morning, but not a ton more.

Due to the recent southern adjustment in our computer models and the chance for a slight further bump south, I don’t expect much snow for far northern Ohio…along the Lake Erie shoreline and east of Cleveland…maybe an inch or two…with a gradual increase farther south. The heaviest snows will probably fall just north of I-70, however whether this heavy snow gets as far south as Columbus, and exactly how much snow falls in this corridor are still somewhat uncertain.

When looking at the track of the low associated with the clipper in the mid-levels of the atmosphere, the NAM takes it right along I-70 (above image). The GFS is about 30 miles south of this track. This mid-level low track is important, because with clipper systems, it is very uncommon to get much snowfall south of the mid-level low track. The NAM track would suggest the best snows staying just north of I-70 and Columbus, while the GFS track would suggest the snow possibly coming a bit farther south, probably along I-70 and into Columbus.

Another factor to consider will be temperatures in the lower levels of the atmosphere (above). The airmass ahead of this clipper won’t be particularly cold, and with a southerly wind flow ahead of the system Sunday morning, air temperatures could easily rise well above freezing on Sunday in parts of southern and central Ohio, which would cause the precipitation to fall as rain in these areas. The NAM is again a little farther north with everything, and at 4PM Wednesday has Columbus a few degrees above freezing (would probably be rain in the city and snow just north at this point)…the GFS is ever so slightly colder, but would still likely be warm enough to cut down on snow accumulations up to about I-70.

Given good agreement on a potential southerly cut-off to the better snows being near I-70 and Columbus due to both the mid-level low track and also warmer air at the surface during the precipitation, I drew a sharp decrease in snow on our map near I-70, with Columbus in the middle of this sharp decrease. I drew the 2-4” area a little farther south than the NAM and to an extent the GFS would currently imply due to the potential for a continued south shift. South of this sharp decrease, IE the rest of southern Ohio including Cincinnati, Chillicothe and Athens, the bulk of the precipitation with this clipper looks to fall as rain Sunday afternoon and evening before transitioning to light snow showers later Sunday night…keeping snow accumulations very light in this area.

Not only are there still some questions over where exactly the heavier snow goes, but disagreements remain over exactly how high snow amounts will be in the corridor of heavier snows…with the NAM showing up to 6 or 7” in spots, while the GFS shows a more pedestrian 2-5” swath of snow. There are some reasons to put some stock into the NAM’s heavier amounts, mainly due to how potent this clipper will be:

Our models are in pretty good agreement in allowing a strong “low to mid level jet” to develop ahead of the clipper Sunday afternoon (above), bringing warmer and more moist air into Ohio (note the somewhat warmer colors on the map over southern Ohio). On the nose of this jet, the air collides with slower moving and colder air and is forced to rise, which is often a source of heavier precipitation in winter storm situations.

In addition to this jet, the models are in pretty good agreement in showing an area of higher vorticity air in the mid-levels of the atmosphere…IE air that has a strong amount of horizontal spin…moving across southern Ohio Sunday evening. This increase in vorticity (PVA or positive vorticity advection) can also be a source of lift and heavier precipitation in a winter storm situation, especially in areas on the northern edge of this higher vorticity (see map below): 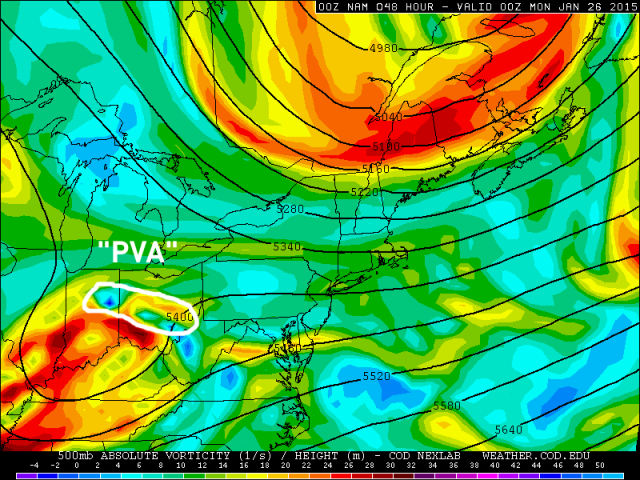 Because these two potential favorable factors for heavy snow may align themselves over central Ohio for several hours Sunday afternoon and evening, the risk for a relatively narrow corridor of 6” or more of snow seems possible. However, this corridor would be fairly narrow, and it’s tough to nail down exactly where it will occur this far in advance, so for the snowfall forecast I just have a swath of 3-6”+ across central Ohio.

All in all, some uncertainties with the clipper in our models, but enough agreement on certain things that allowed us to come up with a snowfall forecast on Friday for this clipper on Sunday. Additional adjustments in track may shift the axis of heavier snow north or more likely south, although we’re hoping any adjustments will be small. A narrow corridor of heavy snow (6”+) could occur, although this will also be dependent on the track of the clipper and also if the clipper is as strong as our models currently suggest…a weaker clipper would probably mean lighter snow.

After all of that, here is my thinking on snowfall as of Friday evening: 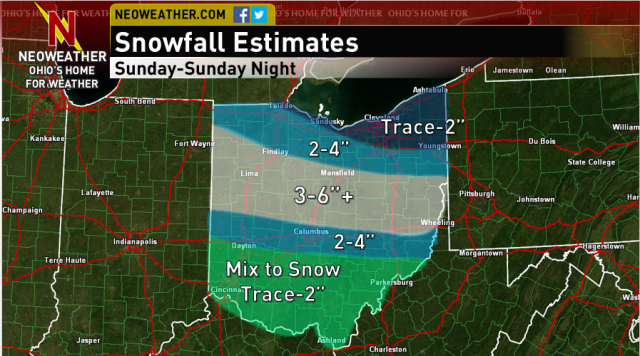 Have a good weekend.

This entry was posted in Storm Forecasts. Bookmark the permalink.