A winter storm will bring moderate amounts of snow, significant blowing/drifting snow, very low visibilities for a time and brutally cold conditions to Northeastern Ohio Saturday through Sunday. A significant impact on travel is expected Saturday mid morning straight through to the evening in some areas.

Light snow will overspread northern Ohio overnight tonight. Accumulations of an inch or so will be possible by 7AM, so conditions tonight won’t really be that bad. The snow will become steadier and somewhat heavier Saturday morning with increasing winds. This will culminate in a brief period of blinding snow squalls with very strong winds along an Arctic cold front late Saturday morning or early afternoon. This will cause a widespread 2-4″ of snow to fall through early Saturday afternoon for most of northern Ohio.

The travel impact could be significant for several hours in the Cleveland metro and Snowbelt (possibly as far west as Lorain and Medina) due to a period of blinding snow squalls and very strong winds. The worst conditions will be from about 10AM to 2PM Saturday, however where lake effect snow continues, very poor visibilities due to falling snow and extensive blowing snow will continue into Saturday evening…a few local areas on the east side could continue with hazardous conditions well into Saturday night. Travel is not advised during the period of heaviest snows and winds.

Temperatures will fall below 0 Saturday evening and stay there until Monday morning. Yes, high temperatures on Sunday may not get above 0 (if they do, it’ll be barely). Wind chills will be -25 to -35 at times Saturday evening through Sunday, which could cause frostbite in 15 minutes to half an hour if precautions aren’t taken. Record low temperatures are likely to be broken Sunday and Monday in Cleveland. If Sunday’s high stays below 8 in Cleveland (which is extremely likely), it will break the record for “coldest high temperature” for the date.

A tall +PNA ridge extending almost to the North Pole is helping facilitate a cross polar flow Friday afternoon, which is allowing frigid air to pour south towards the Great Lakes straight from the Arctic. A lobe of the polar vortex (currently over western Hudson Bay) will drop south through the Great Lakes on Saturday, causing a surface low pressure pictured over Lake Superior above to move southeast and intensify across the lower Lakes. This will cause some light to moderate synoptic snow along and ahead of a cold front that will drop across northern Ohio Saturday morning, and the deep arctic airmass behind the front will help cause some lake effect snow across northern Ohio. Ice on Lake Erie and upstream lake moisture will be critical to the lake effect forecast.

For the remainder of tonight and into Saturday morning, a nice shot of upper level divergence in the left-front quadrant of an upper level jet streak combined with some half decent warm air advection on the nose of a strong mid-level jet will cause light snow across northern Ohio. There could be an inch or so of snow by 7AM Saturday as most models spit out around 0.1” or a little less of liquid precip. Ratios tonight should be 12-15:1 with most of the modest low to mid level lift focused in the DGZ.

As we head into Saturday, low level convergence will really increase along and immediately ahead of the arctic frontal boundary, and falling mid-level temperatures will result in steepening low to mid level lapse rates and some surface based instability. This will lead to the snow becoming a little more snow showery after sunrise on Saturday, but the snow intensity will also increase. This will all culminate in a brief period (an hour or so) of blinding snow squalls along the arctic front late Saturday morning near Lake Erie and around noon or so farther inland. A look at synoptic model plots and forecast soundings in BUFKIT all suggest a very impressive snow squall potential along the arctic front:

There will be a very impressive shot of positive vorticity advection early Saturday afternoon across northern Ohio (and much of the state really). This is a source of lift and can also help raise equilibrium levels and increase instability.

In addition, low level frontogenesis and convergence will be very strong along the arctic front (both sources of lift). Note how at 850mb, there is a very sharp temperature gradient, and also note the sharp and sudden shift in wind direction and increase in wind speeds along and behind the arctic front. These are both sources of convergence and lift that can help an intense snow squall develop.

As alluded to above, the frontogenesis values are fairly strong in the low levels along the arctic front as it drops across northern Ohio late Saturday morning and early afternoon. The layer of deep moisture and steep lapse rates along the front on forecast soundings is impressive due to falling mid-level temps and large scale lift acting to steepen lapse rates and raise inversion levels: 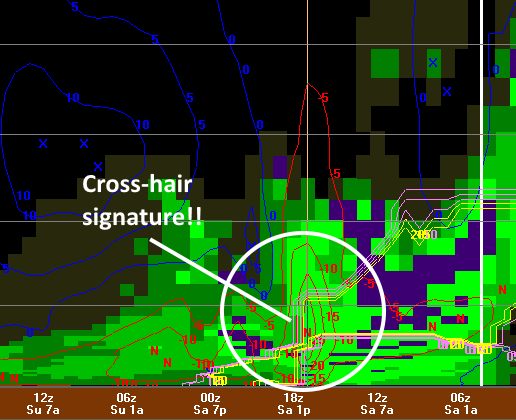 The snow along the arctic front will not only be intense, it will also be very high ratio, with large dendrites likely. Note how the omega (vertical velocity) in the red lines is very strong in the dendrite growth zone (the purple and yellow contours). This suggests that snowflakes will grow very effectively in any snow squalls along the arctic front. With strong omega up to about 17k feet, a flash or two of lightning in any squalls along the front wouldn’t shock me.

Although there were some cirrus clouds on Friday, we got a good MODIS shot of Lake Erie. There is a large crack in the ice east of the Lake Erie islands towards Lorain (very common), and also along the northern lakeshore. These cracks appear to be slushy, but could open up some with breezy  SW winds late Friday night into early Saturday and strong NWrly winds Saturday afternoon behind the arctic front. There are a few smaller cracks farther east, including a pencil thin but long from all the way up the central and eastern lakeshore that may open some if the southwesterly winds into early Saturday enough.

So, not a lot of moisture to be picked up off of Lake Erie, but definitely some.

Immediately behind the arctic front, instability may briefly decrease for a time as surface temperatures crash a little quicker than the mid-level temps (above)…however, the mid-level temps will quickly recover. There’s still a fairly deep layer of steep lapse rates (that gets deeper again by mid to late afternoon) behind the front and high RH air to above 10K feet, so orographic lift could help ring out snow showers starting very quickly behind the front.

By later afternoon, a very deep layer of steep lapse rates will return and good moisture will remain to above 5k feet. Winds will become very well aligned out of the northwest. This may help any lake effect/orographic lift snow showers increase late Saturday afternoon after perhaps a brief lull behind the front. Snow growth will really diminish by this point as the dendrite growth zone is confined to near the ground (much of the lift is just above the ground). This suggests that even as lake effect snow/orgraphic lift snow increases again later Saturday afternoon that it may not pile up as quickly.

The increase in instability later Saturday afternoon will correspond to the vort-max (500mb vorticity on right) moving over Lake Erie and also an increase in mid-level moisture. This all suggests an uptick in lake effect/CAA advection type snow showers…the most concentrated snow will probably be over the higher terrain in the secondary and primary Snowbelts where orographic lift will improve the odds of snow showers developing.

In addition, a surface trough may also drop across the lake Saturday evening, acting as another source of potential increase snow showers downwind of the lake. This surface trough passage does appear to correspond to another increase in low level omega as shown in the NAM overview image above (where I drew a circles and got excited over omega in the DGZ early Saturday afternoon).

Lake effect conditions remain favorable through Saturday evening, so it’s not inconceivable that the vort max passage/mid-level moisture increase and surface trough passage all combine to allow half decent lake effect snow showers to continue through much of Saturday evening, especially in the higher terrain where the NWrly winds will cause good orographic lift. On the sounding above the winds appear to be sheared, but that’s more a product of the trough passing (winds become better aligned again later). The winds veering with height suggests low level convergence along the surface trough…winds over the lake will be closer to the mid-level winds (hence more northerly) due to less friction over the water/ice and slightly warmer temperatures (due to whatever heat flux occurs from the lake to atmosphere)…the warmer temperatures promote mixing of the more northerly winds aloft to the ground. Winds over land will be lighter and NW as opposed to N…convergence near the shore where the two meet.

Later Saturday night, inversion heights and moisture depth decrease quickly, so lake effect should decrease to just flurries after midnight. An exception may be under any Lake Huron band after midnight where light to moderate but very fine snow could continue into early Sunday.

As for snowfall amounts…2-4” synoptic for most. The lake effect is tough. The snowflakes will become very small and hence much lower ratio by late Saturday afternoon, so it will be hard to rack up good accums. The biggest crack in the ice is east of the Lake Erie islands, so to account for this I figured in 1-2” of fine lake effect snow as far west as parts of Lorain/Medina County to push totals to 3-5” here…could see a local 6” total on the west side if a band forms intensely enough before the dendritic growth becomes very low. Farther east, with better terrain and potential Lake Huron moisture, even with the lower ratio of the snow, I have to figure at least another 2-4” of lake effect snow in the higher terrain of the primary Snowbelt. Even though there’s ice on the lake, there’s a lot suggesting decent snow will continue well into Saturday evening, especially in the higher terrain…so I painted in 4-7” here. The only way there’s more is if the Lake Huron connection is better than I think.

As for impacts…winds will gust 30-40MPH behind the arctic front into Saturday evening before gradually decreasing. The snow will become increasingly fine Saturday afternoon and evening, which when combined with the wind could cause significant visibility restrictions into Saturday evening before a gradual improvement occurs. The falling snow and likely extensive blowing snow will cause roads to be very slick from late Saturday morning when the arctic front drops through into Saturday night. Wind gusts and visibilities may arguably push blizzard conditions where lake effect sets up Saturday afternoon and evening, although it may be hard for many spots to actually verify 3 hours straight of 0.25 mile or less visibility and 35MPH wind gusts…but some places will be close.