This would result in active weather continuing in the west, where they desperately need the rain, with warm and mainly dry weather over the east. The European and GFS ensembles are in good agreement in ejecting the trough out of the west and providing for a brief cool down in the Midwest, Great Lakes and Northeast to end the work-week and into next weekend, however, the PNA stays negative and the AO/NAO stay largely positive, suggesting this cool down will be transient and not particularly intense: 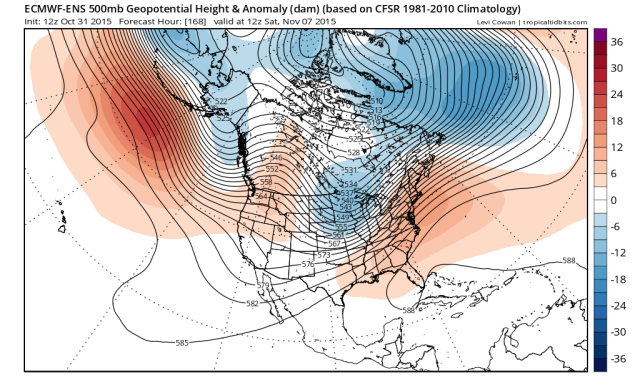 The European ensembles do indeed build the western US trough and eastern US ridge back into place by the time we start NEXT work-week (the week of November 9th):

It appears that for those excited for winter in the east that they’ll have to wait until later in November for any hope. The GFS ensembles are in agreement, keeping all three main teleconnections unfavorable until at least mid-November, with very few members deviating from this. Yes, the NAO and AO start trending down towards mid-month, but this isn’t a strong enough signal (on its own) to forecast a cold second half of November:

This November warmth may come as a surprise to many, as believe it or not, most strong El Nino events since 1950 have featured a cold November in the central and eastern US:

This begs the question, why is this discrepancy occurring this November, and how long will it continue? The likely explanation for this departure from a “normal” El Nino pattern for at least the first half of November likely has to do with MJO activity in the Indian Ocean:

After the bulk of the last 90 days featuring no MJO activity, which is quite typical in stronger El Nino events, as tropical forcing is dominated by consistent convection over the central and eastern Tropical Pacific in strong El Ninos with subsidence and limited convection elsewhere, the last week or so has featured an MJO “flare-up” in the western Indian Ocean. MJO activity here is actually more typical in La Nina events, when the waters in the central and eastern tropical Pacific are cooler than normal, so it’s not a surprise that MJO activity typically associated with a La Nina (the opposite of El Nino) forces quite a different North American weather pattern than what we’d expect with an El Nino. 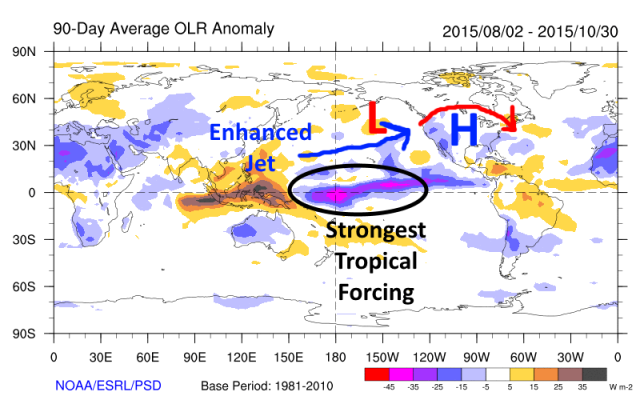 The strongest tropical forcing occurring near and east of the International Dateline enhances the jet stream over the central Pacific (due to latent heat released from the convection increasing geopotential heights in the Tropics and tightening the pressure gradient north of this area), forcing a low south of Alaska (due to favorable upper level divergence in the left-exit quadrant of the enhanced jet), forcing a ridge over central and western N. America. The last 90 day 500mb pattern matches this idea fairly well (although not perfectly over eastern N. America):

Over the last week, the OLR anomalies clearly show the more active convection over the Indian Ocean (and somewhat less impressive convection over the eastern Pacific), which changes where the tropical forcing occurs and alters the large scale weather pattern across the entire Northern Hemisphere, as the jet becomes more enhanced over Asia, and not the Pacific:

The 500mb pattern over the last week, while not perfectly resembling the look above, does have the general idea:

There is still some sign of typical El Nino forcing, with a low over the Aleutians, however it is significantly diluted from what you’d expect in a typical El Nino pattern (typically in strong El Ninos, this low is stronger and farther southeast in November).

In attempting to determine how long this trough west/ridge east pattern will continue into November, the key likely lies in determining how (or even if) the current MJO activity will propagate east, and when more convectional El Nino tropical forcing will return. 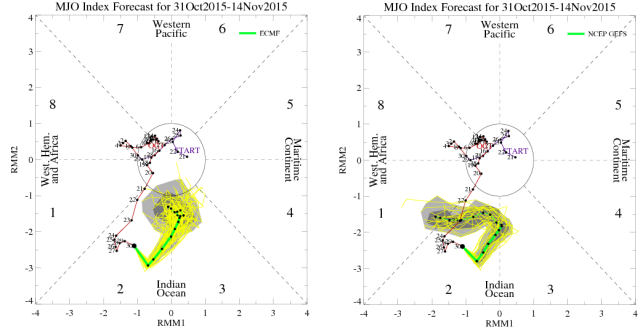 The GFS and European ensembles have slightly different ideas over the next two weeks; both models do suggest the MJO will weaken some, however, the GFS maintains the more active convection over the western Indian Ocean and keeps the MJO safely outside of the “circle of death,” while the European slowly propagates the MJO east will weakening it. The European solution would likely result in more typical “El Nino” forcing returning in 2-3 weeks, while the GFS would belabor that process.

Given that strong, basin wide El Nino events (with the exception of 1987-88) tend to feature limited MJO activity, the European solution makes more sense, and would likely result in near normal temperatures in the eastern US for the last week to 10 days of November, with warmer than normal temperatures building into the west (especially the Northwest, compared to normal) and perhaps northern Plains (so, the pattern would start to take on the typical canonical strong El Nino look by the end of the month).

However, this MJO activity will have to be monitored closely as we head through November to see if it will in fact just weaken, returning us to El Nino dominated tropical forcing. It isn’t normal to have a basin wide El Nino that is this strong, period, however the very warm waters along the west coast of North America and in the Indian Ocean may be indicators that typical very strong El Nino progression may not work out “perfectly” this winter, as I discussed extensively in my winter outlook.

As for AO/NAO help, at this point it’s a waiting game to see if we can start getting an attempt at enhanced heat flux from the troposphere to the stratosphere in November as Dr. Cohen’s Snow Advance Index suggests, along with other research. Any AO/NAO help later in November would likely have to come from tropospheric influences.

I’ll attempt to update these longer range, large scale pattern posts once a week or a little more frequently, but that’s dependent on how busy I am on a week to week basis.