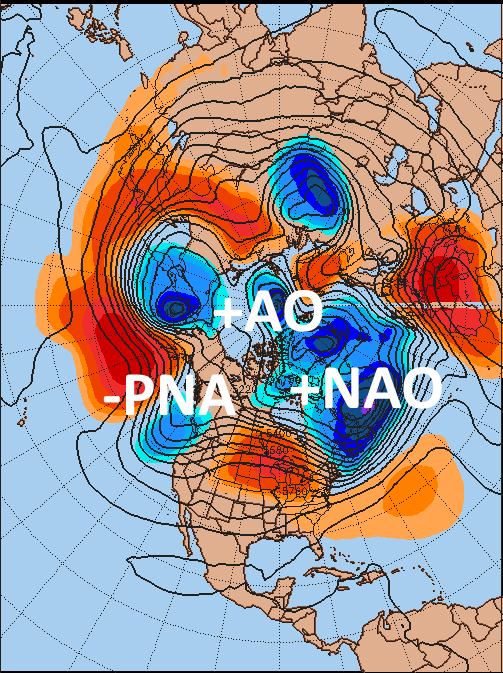 It was a very warm first week of November in the central and eastern US, with many record highs (including some monthly records) broken from Florida all the way up to Michigan. The weather pattern still isn’t a cold one, with three of our main teleconnections for North America pointing to a cool west and warm east, however this will change some as we head towards the end of the week; the question is, will this be enough of a change to allow for a good shot of below normal air to occur with possible snow, or will it just be enough of a change to knock temperatures back closer to normal after last week’s very warm conditions? 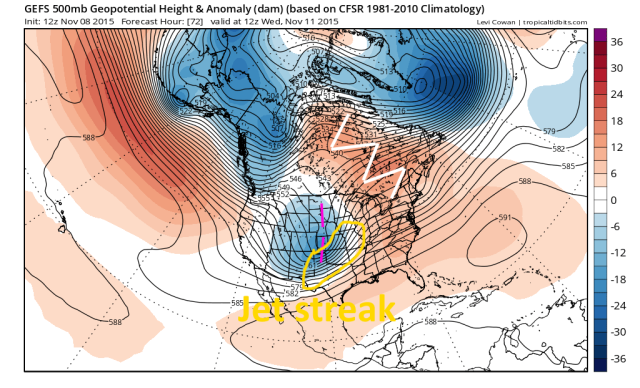 As we head towards mid-week, a very potent shortwave associated with a 150kt+ jet streak will eject out of the Rockies into the Plains and cause a strong lee cyclone to form and track towards the Great Lakes. The strong jet streak combined with a tight temperature gradient between cold with the trough moving out of the Rockies and persisting warmth over the southern and eastern US will allow this low to become quite deep as it tracks into the Great Lakes, possibly fostering an outbreak of severe thunderstorms and causing a large area of gusty winds behind the system:

If time permits I’ll have a post detailing this system Tuesday night (assuming it still looks to be a potentially potent severe threat), but the main impact in the bigger picture this storm will have is to re-enforce ridging over eastern Canada and then undercut it, causing a bit of a west-based –NAO block to form: 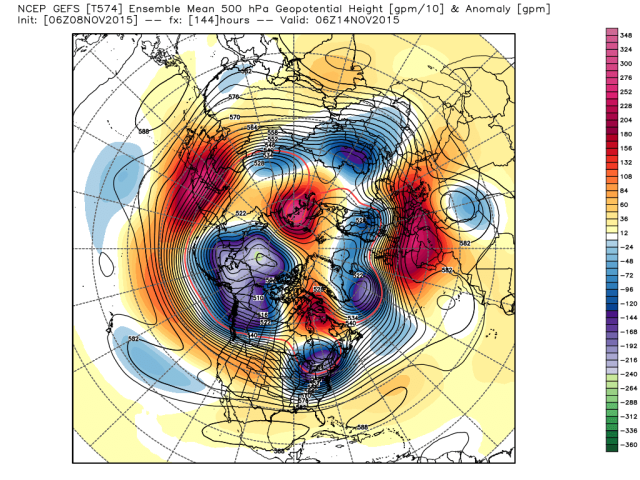 The parallel GFS ensembles (they’ll be operational at some point) show a decent little ridge over eastern Canada and the Davis Strait, which is enough to slow the trough down over the eastern US and force it a bit farther south. There MAY be enough cold air with this solution for perhaps some minor lake effect snow off of the Great Lakes and some upslope snow showers in the mountains in northern New England, but overall the –NAO is not very strong or well located for big East Coast storms moving forward, and there’s no real 50/50 low either…so essentially the upper low/trough continues to eventually move east under the ridge: 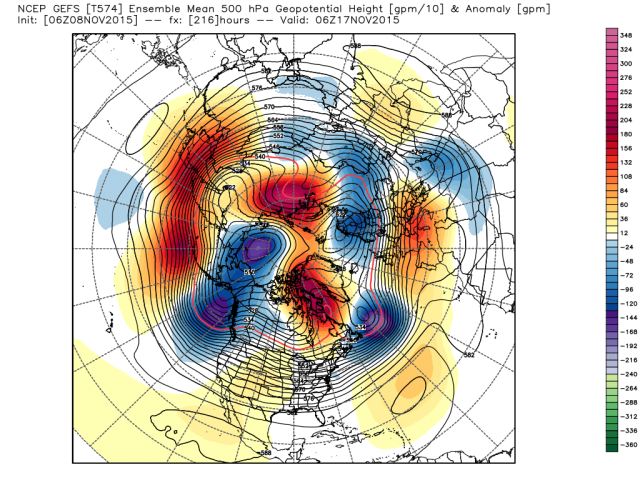 You can see by day 9 that the trough has moved northeast away from the US, showing that although there is a modest –NAO block, which doesn’t hurt, it really isn’t significant enough to have a major impact on the pattern in the day 6-10 timeframe…although it may slow down/amplify the trough enough for a couple days of below average temps over the Northeast. The 0z ECM and 12z GGEM ensembles agree with this evolution.

By this point in 9 days, the look from the GFS ensembles has improved some from current; although it’s not a classic block, there is some west based –NAO ridging, and higher heights over Siberia and the Davis Strait are extending into the Arctic and at least allowing the AO to trend to more neutral values; this downward AO trend is more a result of tropospheric influences than it’s due to any stratospheric activity, as the stratospheric polar vortex is currently very strong and strengthening (which isn’t uncommon for November). The next opportunity for some upwelling and weakening of the stratospheric vortex may come later this month (and I’ll try to look at that more next weekend). The Canadian and Euro ensembles in the day 8-9 timeframe do overall show a similar look:

The ESRL GFS ensemble based teleconnection graphs do show the improvement in the NAO department over the next 7-10 days, but also show the issue, that is also plainly visible on the images above too: 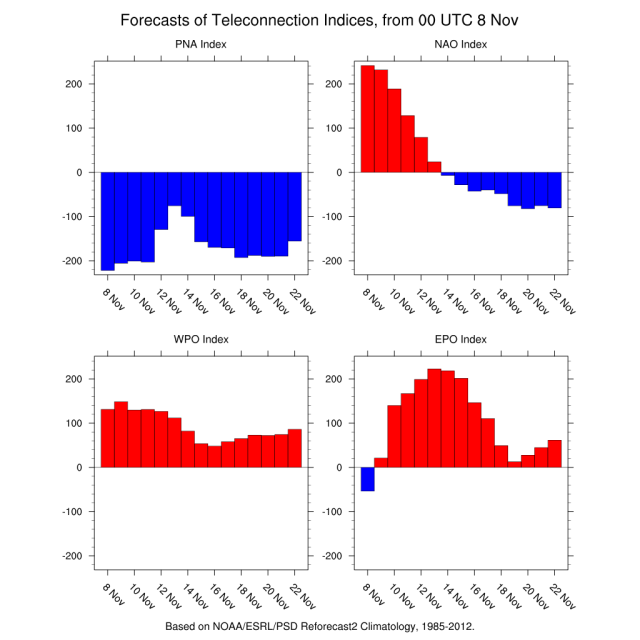 Although the Atlantic and Arctic improve slightly, the Pacific remains rather putrid for eastern US cold for at least the next 10 days. The PNA remains negative, indicative of higher heights near the Aleutians and lower heights along the west coast, while the EPO remains positive, indicative of troughing over the Gulf of Alaska and Alaska, which floods much of the continent with mild Pacific air. The WPO being positive isn’t as much of a kiss of death if the low height anomaly with it ends up a little farther south or west towards northeast Asia, however this isn’t the case over at least the next 10 days. Basically, these indices are telling us that a small black hole will form over Alaska and the Gulf of Alaska over the next week and a half at least, which will flood the continent with mild Pacific air…so any marginal NAO help probably won’t be able to overcome this and allow for sustained cold in the east. In fact, it wouldn’t surprise me with such a strongly negative PNA that the week of the 16th at least starts warmer than average in the east after a few days of cooler weather centered on next weekend.

Last week I discussed how tropical forcing was becoming stronger from the Indian Ocean, and this has remained the case this week. This supports higher heights over a good portion of the northern Pacific and troughing over the western US. There is a bit of change this week as some convection has begun re-flaring in the Pacific just east of the Dateline, although the Indian Ocean convection has generally been stronger and more persistent this week. Here’s what the global jet stream looks like: 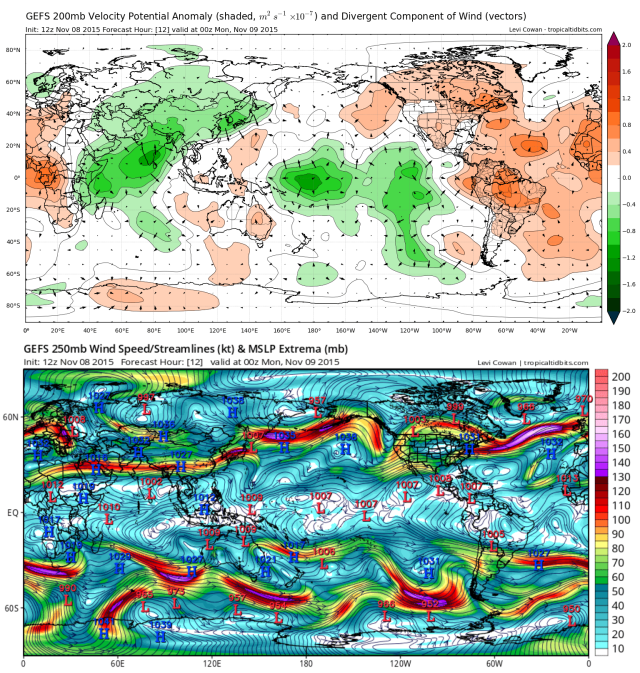 It’s again important to explain how/why tropical convection can alter the hemispheric weather pattern: more persistent convection releases latent heat along the equator, causing higher heights north of the convection and a stronger jet stream due to a tighter pressure gradient aloft. When the jet stream gets east of the persistent convection and attendant higher heights you get an area of divergence, which tends to support storminess, which pulls warm air north east of this region and causes a ridge aloft. Extra-tropical forcing can also affect the jet stream, tropical convection/forcing is just an (important) part of a larger equation.

On the above image, which is essentially current (it’s a 12 hour forecast), you can see a stronger jet north of the persistent Indian Ocean convection, and some attempt at ridging over the central Pacific, which does support western US troughing as discussed last week. The increasing convection just east of the Dateline may also be supporting a stronger jet over the north-central Pacific, which supports storminess over Alaska. If this storminess is persistent it can cause a fairly persistent upper low to develop over Alaska/the Gulf of Alaska, which the three ensembles all suggest happening over the next 7-10 days. From here, it’s important to try to predict what convection in the tropics will do over the next couple of weeks to find out if a more improved Pacific pattern may try to develop: 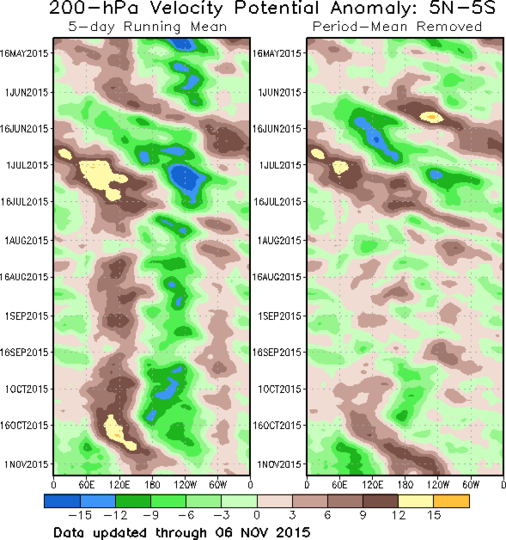 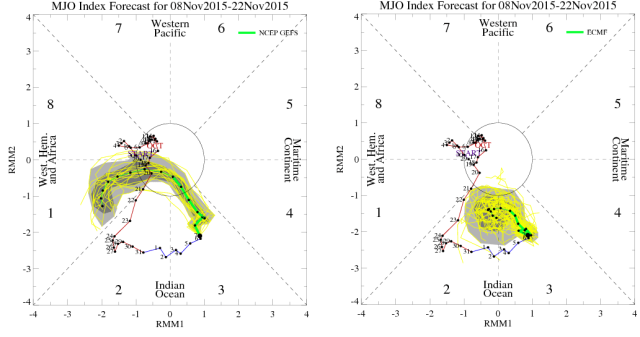 The GFS and Euro ensembles both appear to agree on the convection over the Indian Ocean trying to weaken over the next week, although to what extent it weakens is disagreed upon. The convection has persisted more than either model expected a week ago. The GFS ensemble solution shows the Indian Ocean convection completely weakening, which would likely allow El Nino forcing to take back over during the next 1-2 weeks. The GFS ensemble does then show another flare-up developing in the 10-14 timeframe in a potentially more favorable area if you want cold in the eastern US. The European ensemble shows the convection remaining over the Indian Ocean but perhaps weakening some. The Euro makes a bit more sense to me as the convection isn’t a propagating wave, and if El Nino convection does try flaring back up over the next week or so it may try to suppress convection elsewhere. In general, I’m not really hot on the idea of convection becoming more focused near the Dateline in the near future, which is the eastern US cold sweet spot. 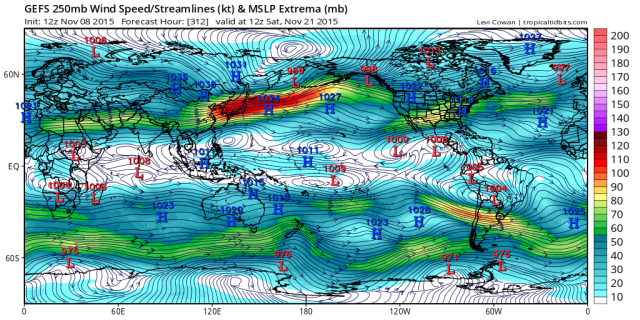 One interesting feature to note, is that the GFS (shown) and Euro ensembles have both been persistent in their idea of retracting the Pacific jet for a few days around November 20th, perhaps as a result of convection in the tropics shifting around some. If this occurred, it would suggest the low over Alaska shifting west towards the Aleutians, causing the PNA to rise and the EPO to fall in about two weeks. As far as my interpretation goes, I don’t think tropical forcing supports this persisting for an extended period of time, but both ensembles have shown this for a few days. This could support a cool down in the central US (that possibly works east) Thanksgiving week. 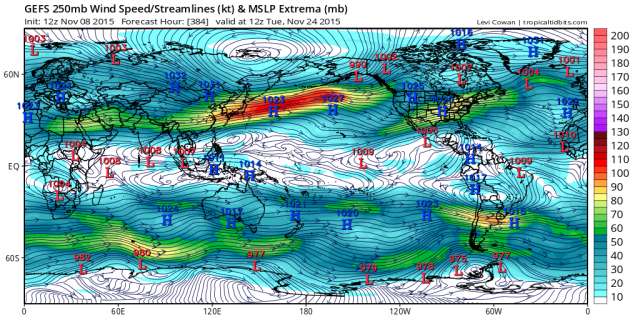 Both ensembles (GFS ensemble shown) begin extending the jet again after a few days, which would make sense if convection increases in the central Tropical Pacific in associated with the El Nino and very warm waters there. This leads me to believe that any Pacific driven cooldown around Thanksgiving would be short lived.

The parallel GFS ensembles do attempt to show a brief improvement in the Pacific pattern around the 20th as the Alaskan low retrogrades west, which would possibly support ridging over Alaska/western Canada and allow some cold into the central US, but note how the low starts shifting back west towards Alaska towards the end of the run, which would likely allow Pacific air to start blasting into North America again shortly after Thanksgiving.

In general, I’m thinking that after the east warms back up for the first few days of this week that a few days of below average temperatures do occur across parts of the Great Lakes, Ohio Valley, New England and northern Mid Atlantic as a west based –NAO occurs and causes a trough to slow down and amplify some as it tracks across the Northeast. The Western US should be mild in this timeframe.

As we head into the week of the 16th I expect near normal temperatures and stormier conditions to return to the west (especially the northwest), with milder weather compared to normal over the central and eastern US.

Between the potential for modest NAO help and some ensemble suggestion for a brief Pacific pattern improvement, it wouldn’t surprise me if Thanksgiving week is a bit cooler than average over the central and eastern US and warmer than average over the west, but I expect El Nino forcing to allow for a Gulf of Alaska to return to start December, resulting in a mild start to the month.