For record keeping purposes, here is a post I made on Neoweather’s Facebook page this afternoon regarding the expected lake enhanced rain/snow tonight in NE Ohio 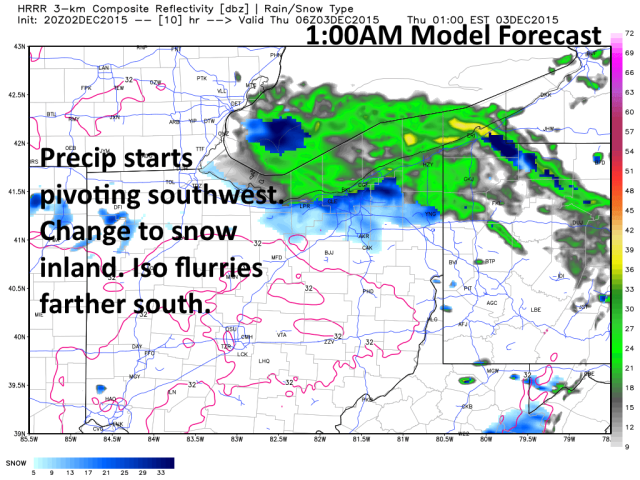 An upper level low pressure combined with a trough of low pressure in the low levels of the atmosphere will combine with moisture and instability off of the relatively warm waters of Lake Erie to cause rain to develop this evening across the lakeshore counties and Snowbelt east of Cleveland that changes to snow tonight and ends Thursday morning. The potential exists for a period of moderate to heavy snow overnight tonight inland from Lake Erie in the Snowbelt that produces accumulating snow and a period of hazardous travel. Travel conditions should improve during the AM rush…but locations from the hills in southern and eastern Cuyahoga County points east could see some lingering impacts during the early portions of the AM rush.

Rain showers will increase in coverage across portions of our coverage area this evening, mainly from Cuyahoga County points east. These showers could be mixed with a little graupel or soft hail, but will primarily fall as rain initially. The heaviest precipitation before midnight will be mainly focused on parts of Lake, Geauga and Ashtabula Counties. After midnight, the trough of low pressure will start slowly shifting southeast, which will start pushing precipitation into the rest of the lakeshore as far west as Erie County, including the Cleveland metro. The rain will likely start changing to snow away from the lake by midnight as colder air works in. Temperatures during the snow may stay a little above freezing, which means it will be a very wet snow.

A period of moderate to heavy snow appears to be a decent possibility in inland portions of the Snowbelt for a few hours during the pre-dawn hours on Thursday. Temperatures will again be a little above freezing in the snow, but the heavy nature of the snow could cause slick roads to develop in parts of the Snowbelt east of town at times after midnight. The heaviest snow in the Snowbelt will likely occur between 2AM and 6AM Thursday. As the precipitation moves southeast across the Cleveland metro, light to moderate bursts of snow are also possible away from the lake in parts of Lorain, Cuyahoga, northern Medina and northern Summit Counties. Again, the lakeshore will stay mainly rain or a mix.

The window for snow will be fairly brief (only a few hours), but the potential for moderate to heavy snow should allow for 1-3” of slushy snow to fall in the inland portions of the Snowbelt east of Cleveland; that’s eastern Cuyahoga, Geauga, inland Ashtabula, northern Trumbull and possibly far southern Lake Counties. Some portions of northern Geauga County and inland Ashtabula County could see locally up to 3-4” of wet snow if the changeover to snow occurs quickly enough. In the Cleveland area, a light dusting could occur inland from the lake…and the hills in southern Cuyahoga, northern Medina, northern Summit and northern Portage Counties could see a slushy accumulation up to an inch. Elsewhere, a few snow showers could occur and a dusting can’t be ruled out, but there won’t be any accumulations to write home about outside of the Snowbelt.

The amount of snow won’t be a ton and this will all end quickly Thursday morning, but a period of slick travel with low visibility due to snow seems like a decent possibility during the wee hours of Thursday morning in parts of the Snowbelt away from Lake Erie, with a lot of other areas seeing some snowflakes. Plan accordingly if you are an early commuter east of Cleveland. Conditions will again improve quickly during the rush hour Thursday morning. –Jim