A strengthening area of low pressure located just west of Cincinnati as of midnight will track northeast likely just south and east of Cleveland on Sunday while intensifying. There is currently a narrow zone of some deformation snow on the back side, with the cold air just catching the back end of the precip. This band of snow has a history of generally producing 1-2” snow amounts with locally a little more across parts of southern IL and western KY.

As the low pressure deepens and as the upper level vort max associated with the sub-tropical jet shortwave fueling the system moves right over eastern Ohio, the deformation snows should maintain and perhaps intensify slightly as the system moves northeast across Ohio. 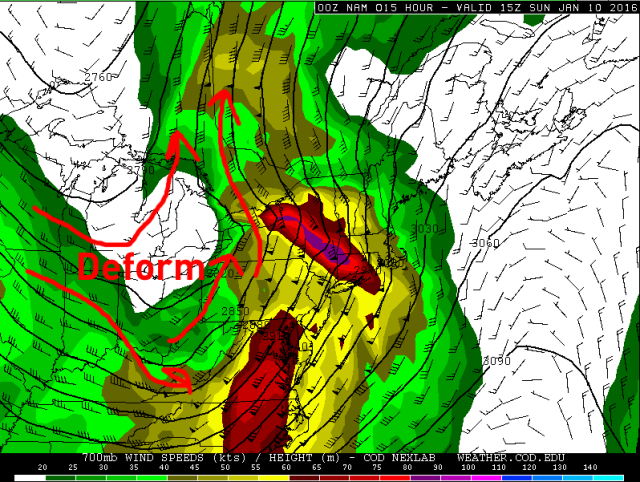 The models appear to be in good agreement in tracking the best deformation from southwestern Ohio NNE towards the central lakeshore. The 700mb and 500mb vertical velocity plots also support this notion, with the best upward motion in that general corridor:

By 1PM, safely after the rain/snow changeover for even eastern Ohio, note how the upward motion associated with the deform zone is starting to pull away to the northeast, mainly affecting the central and eastern lakeshore:

The idea here is similar to what is happening to our southwest currently, there will be enough mid-upper level support for a brief period of moderate or even briefly heavy snow right around the changeover, however the support for better snow will be fleeting. With this said, the models are spitting out QPF of around 0.10-0.15” per hour for an hour or two after the rain/snow changeover for most areas in north-central and near the lake in northeast Ohio which jives with a brief period of decent snow. The majority of modelling appears to be in general agreement on about 0.20”-0.30” of QPF falling after the change to snow in the corridor from SW to north-central and the east lakeshore on Sunday. The duration of good snows and adjusting ratios to account for some initial melting due to the wet ground suggests that amounts may be more like 1-2” in this corridor…maybe locally more if there’s some locally better mesoscale banding, especially across the central highlands where the better elevation may allow for a somewhat quicker changeover.

A forecast sounding from the 0z NAM for CLE is interesting. It shows the moderate lift in the mid-levels (the white line is vertical motion, to the left of the middle is upward motion) with the synoptic deformation zone, and also increasing instability in the lowest few thousand feet along with strong NW winds on the low levels and good upward motion in the low levels as well. This suggests that increasing low level instability and upslope may allow for lake enhancement to the snow Sunday afternoon for a time in mainly the upslope areas. This could allow for 2-3” amounts to fall on Sunday in the Snowbelt, especially in the higher terrain. The better moisture above 700mb starts stripping away around 4PM per forecast soundings, which would likely signify an end to the wrap around and good lake enhanced snow. This gives about a 4 hour window in the Snowbelt with the changeover around noon give or take an hour, so even with a potential period of rates near 1” per hour I have trouble seeing anyone getting more than 3” in the Snowbelt of wrap around snow during the day on Sunday.

By Sunday evening the flow becomes well aligned from initially the west-northwest with low level instability increasing over the lake as 850mb temps drop to near -18C. We’re on the edge of the upper level trough so the depth of the moisture and instability is marginal, with moisture to near 5k feet and equilibrium levels to around 7-8k feet at CLE. Convergence should increase over the Snowbelt as high pressure builds in over land and slowly shifts the winds over land to the WSW, which will support a band. Moisture depth and instability support moderate snowfall with good ratios (good instability through the snow growth zone) Sunday evening in NE Ohio should convergence be strong enough for a band to develop.

There also is good support (via 850mb RH/streamlines above) for moisture from Lake Michigan to help pre-seed Lake Erie through Sunday night. This may make up for the somewhat shallow moisture/instability and allow any bands that become mature to lift moisture and instability to higher levels. 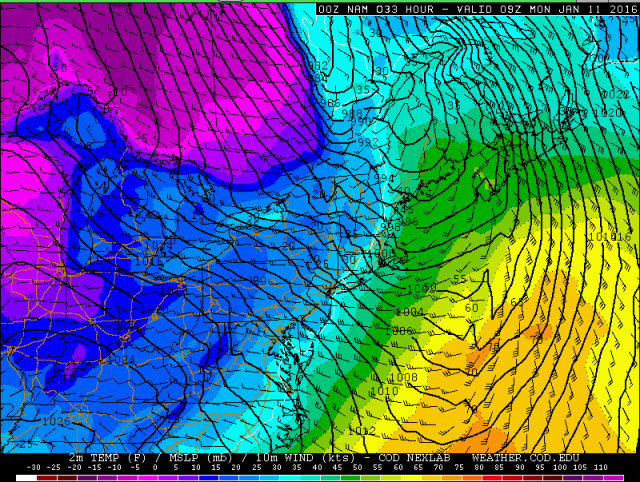 After midnight Sunday night the winds on land become WSW with west winds over water. This tends to push the convergence and better banding into eastern Lake County, northern Ashtabula County and into Erie County. The models show the winds moving very little with persistent strong convergence in this corridor for several hours Sunday night into Monday morning before the winds turn more SW and start pushing the band completely over the lake Monday afternoon and towards SW NY. 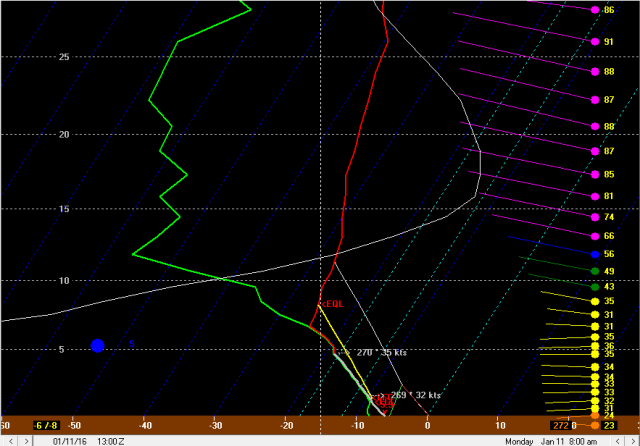 Forecast soundings for ERI are decently impressive Sunday night into Monday morning with little wind shear…moderate instability extending up to 10-11k feet…moisture to above 5k feet…good vertical motion in the snow growth zone…and likely strong low level convergence in this area. This supports moderate to briefly heavy snow with ratios of 20-30:1, which is typical for LES with cold (but not too frigid) temperatures. With the banding potentially lasting several hours in a similar area late Sunday night into Monday morning with good ratios, and rates of 1 to possibly 2” per hour at times, the potential certainly exists for a significant accumulation where this banding occurs.

The snow should completely end or be just reduced to some flurries in all of NE Ohio and NW PA by Monday afternoon as we then await the arrival of the clipper and LES behind that.

As for snow amounts and placement…

Have 1-2” for most of the area except for SE of a roughly Millersburg to Youngstown line, where the deform will be weaker leading to a period of mainly light snow with accumulations less than an inch. In the 1-2” area, a period of decent lift in the deform band should result in a brief period of moderate to briefly heavy snow and a quick 1-2”…locally more in the central highlands if a quicker changeover occurs. With lake enhancement occurring…brought 2-4” totals as far west as parts of Lorain/Medina Counties…although most areas will see mainly 2-3” here. Expect similar totals with the deform snow/lake enhancement on Sunday in parts of Cuyahoga, northern Summit, Lake, Geauga, northern Portage and Ashtabula Counties…maybe 1-2” of wrap around snow in NW PA as the best lift may only clip that area during the synoptic snow.

As for the lake effect portion Sunday evening through Monday morning…initially the lake effect could clip Cuyahoga County and southern Geauga County early in the evening as winds shift from NW to more WNW. Good snow ratios along with moderate instability but marginal moisture depth combined with a long fetch, some lake Michigan moisture and increasing low level convergence suggests moderate snow will be possible. I expect the snow in Cuyahoga County and southern Geauga County (along with perhaps adjacent NE Summit/northern Portage/Trumbull Counties) to be short lived and maybe produce another inch. The band will likely start becoming more focused in extreme NE Cuyahoga, western Lake and the northern half of Geauga into Ashtabula and Crawford Counties by mid to late evening as convergence increases and the fetch increases as the winds start going more due west. The lake effect in these areas will last a few hours and add maybe 1 to locally 3” of additional snow given the expected rates (half an inch to briefly an inch an hour) and duration of lake effect in these areas. In eastern Lake…northern Ashtabula…Erie…and perhaps far northern Crawford Counties there may be some snow shower activity in the evening given a long fetch and good instability, along with terrain in Erie and northern Crawford Counties, but the convergence should initially set up south of these areas, leading to mainly light additional amounts in the evening. By midnight or so the convergence should shift north into these areas as winds overland become WSW and winds over water are west. The convergence will be persistent in these areas for a good 6-10 hours so I expect banding into these areas for over 6 hours that doesn’t move too much after midnight Sunday night through a good portion of Monday morning. Moderate instability, marginal to decent moisture depth, equilibrium levels near 10k feet, steep lapse rates and good vertical motion in the snow growth zone suggesting efficient snow ratios and strong convergence suggest snow rates will be moderate to heavy in any banding in this timeframe, with rates of 1” per hour likely and brief rates near 2” per hour possible early Monday morning in Erie County when instability and convergence appear to reach their peak. Well established lake effect bands often have better moisture depth and instability than modelled due to persistent upward motion modifying the environment on a small scale which also suggests heavy rates are possible. This suggests additional lake effect accumulations of 4-8” from northeastern Lake County east into northern Ashtabula County and a good portion of Erie County. This is assuming the band will move a little bit and keep one area from getting drilled with 2” per hour rates for several hours. It isn’t impossible if the band stalls that local lake effect accumulations of 10” or so occur, most likely in Erie County. With pretty strong westerly winds persisting over water I suspect inland Erie County will do better than the lakeshore with convergence likely staying a little bit inland.

This all gives storm total accumulations of 1-2” for most of north-central and northeastern OH…with locally a bit more in the central highlands near Mansfield and Mount Vernon, 2-3” in parts of Lorain/Medina/western Cuyahoga/northern Summit/northern Portage/northern Trumbull, 3-4” in eastern Cuyahoga, southern Geauga and southern Ashtabula into southern Crawford, 4-6” in most of Lake, northern Geauga, central Ashtabula and northern Crawford, and 6-10” in far eastern Lake, northern Ashtabula and inland Erie Counties. Local storm total accumulations of up to a foot are possible in Erie County if the lake effect band is slow enough moving.