It’s mid-August and the heart of Atlantic hurricane season is quickly approaching; almost as if on que, we have a tropical storm (Fiona) in the central Atlantic, with another tropical wave behind it (designated “Invest 99L”) that is being monitored for development.

Let’s first start with Tropical Storm Fiona. The tropical storm is currently battling moderate shear that is expected to increase through the weekend. This should cause Fiona to weaken this weekend. Models suggest that the shear may decrease early to mid next week, which may allow for some re-intensification if Fiona can survive until then. 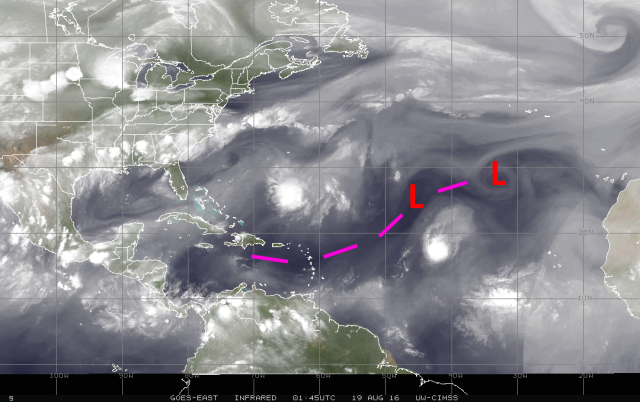 Water vapor imagery shows the less than hospitable that lies ahead of Fiona over the next few days. An upper level trough axis (sometimes referred to as a Tropical Upper Tropospheric Trough or TUTT) is visible on the imagery, with a belt of stronger shear. The darker colors on this water vapor image also indicate dry air. As Fiona moves northwest directly into this fairly strong shear and drier air, it will likely weaken. It’s not impossible that the cyclone can’t survive the weekend given it’s not very strong right now and will deal with this unfavorable environment for a good 72 hours.

As for where Fiona tracks, assuming it survives the weekend as a tropical cyclone, it currently appears very unlikely that Fiona does anything other than recurve well east of the United States. Fiona is currently approaching a weakness in sub-tropical ridging, and as a large trough moves across the eastern US and breaks the heat this weekend, the weakness in ridging will expand while ridging becomes stronger to the northeast of Fiona. This eastern ridge will pull Fiona up through the weakness to the north by early next week. Although ridging begins rebuilding over the western Atlantic/eastern US as we head deeper into next week, Fiona will likely be far enough north to safely get caught up in the westerlies and whisked off to the east-northeast, away from land. This is a great example of why it’s rare for tropical cyclones that gain considerable latitude far east out in the Atlantic rarely go on to hit land in the western Atlantic, even if there’s ridging over the eastern US. 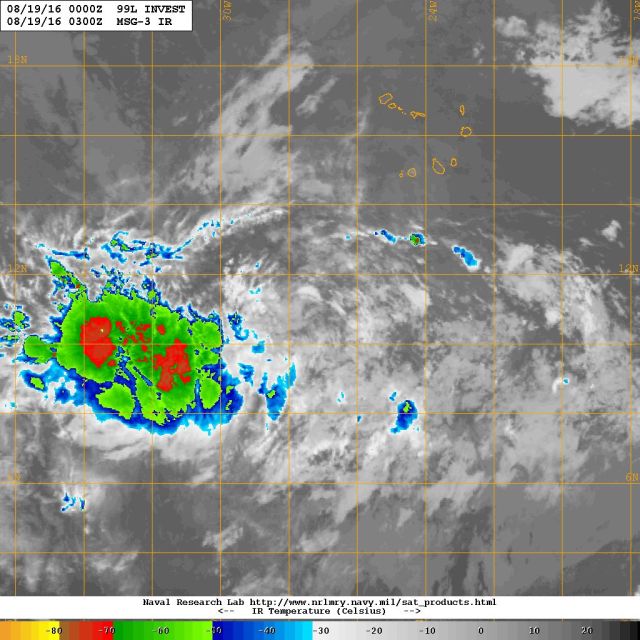 Behind Fiona, the next system to watch is Invest 99L, which is pictured above. Satellite loops don’t show a well-defined surface circulation yet with 99L, and the bulk of the relatively disorganized convection appears to possibly be displaced to the west/southwest of the strongest surface vorticity (spin). Microwave satellite imagery from Thursday afternoon of 99L shows little organization to the system’s convection, with no hints of a circulation or any banding features: 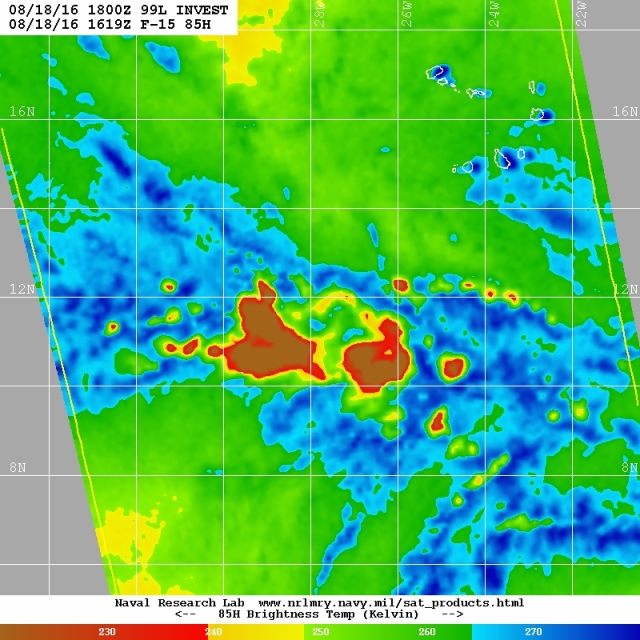 This current lack of organization likely means development into a tropical cyclone probably won’t occur until later this weekend or early next week, as the system tracks towards the west or a bit north of due west. 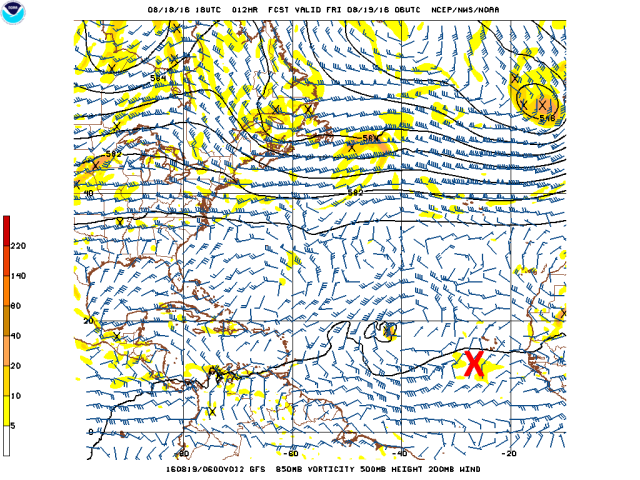 The environment around 99L (per very short term GFS model forecasts) isn’t currently extremely hostile, however it’s less than optimal. Fiona has done the dirty work and lessened the amount of dry air in its wake, which is conveniently where 99L is right now, however some north-northeast wind shear on the backside of an upper level ridge to the northeast of 99L is currently impacting the system (per the convection being displaced west/southwest of the “center” of 99L). This shear is expected to continue and turn easterly for at least a few days as 99L slides south of the upper level ridge: 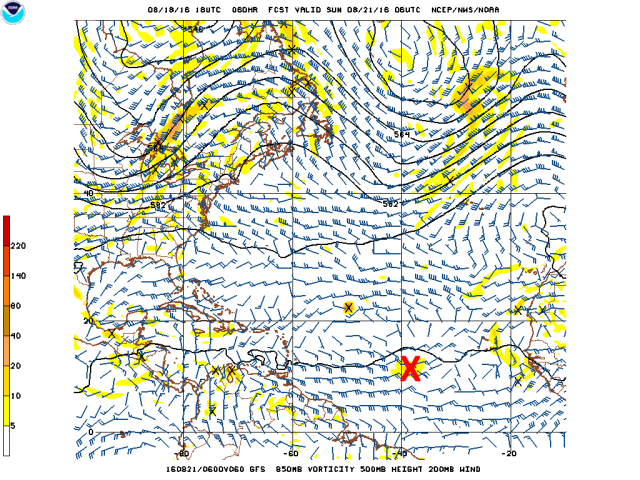 By early Sunday morning, the GFS still shows moderate (15-25 knots) easterly shear affecting 99L as it moves west. While this won’t completely preclude slow, gradual organization through the weekend, it will likely prevent rapid development over the next few days. As we head towards Monday and Tuesday of next week, the GFS shows 99L becoming a bit better co-located with the upper level ridge, allowing shear to decrease and some better divergent flow/outflow to possibly develop over the system: 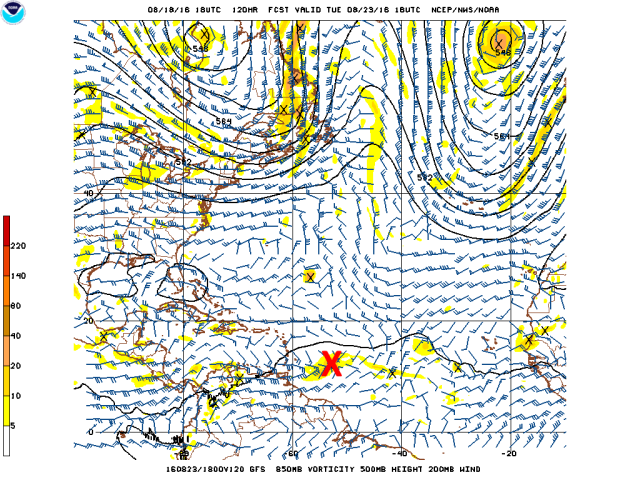 The Euro, although it isn’t very thrilled in the development prospects of 99L, also shows the system moving into a more favorable environment for development early next week: 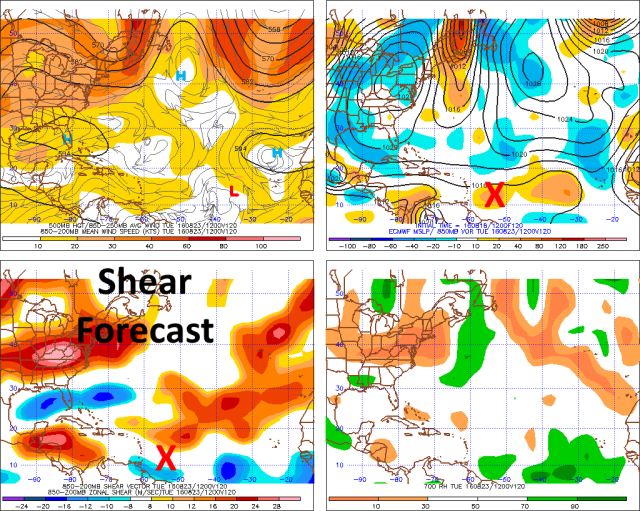 Given the current lack of organization with 99L, the moderate shear expected through the weekend, but the improving conditions expected by early next week, I think Monday or Tuesday is a good target to watch for possible tropical cyclone genesis out of 99L. Since the system will be moving parallel to the shear vector, which may try to limit the shear’s impact on the system, and since there isn’t too much dry air around 99L, it’s not impossible we see development sooner…however, for now I’m going to be conservative and not expect much before early next week. 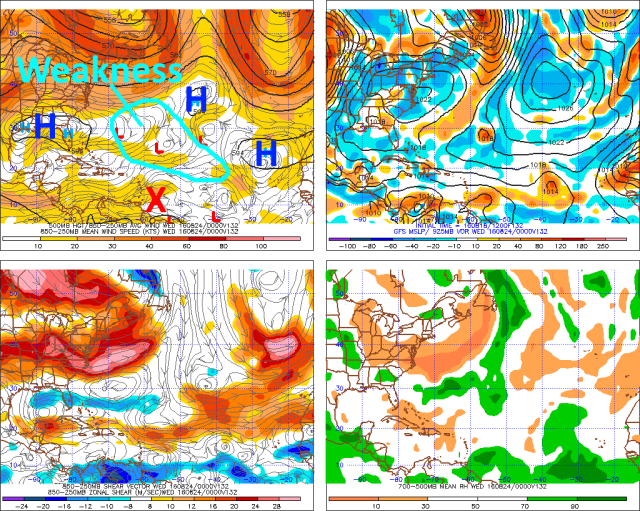 Where 99L tracks as we head into next week seems to be very dependent on how quickly it develops/intensifies. An open wave or weak tropical cyclone would likely continue moving west or west-northwest over the next several days as it follows the easterly trade winds in the tropical Atlantic. If the system intensifies, there will still be a weakness in the sub-tropical ridging over the central Atlantic, between stronger ridging over the east Atlantic and also over the southeastern US. A strong tropical cyclone east of about 70W would likely begin to turn northwest due to the weakness in the ridging aloft, and possibly recurve out to sea. A storm that doesn’t intensify until it’s farther west would likely be more influenced by the western portion of the sub-tropical ridge, and likely stay farther south.

The GFS ensemble members show this very well; the members that intensify 99L quickest show a sharp turn to the north, while the weaker members maintain a more westerly track. The Euro ensembles, although I can’t show them here, do have a good chunk of members (roughly 10/50) that develop 99L into a robust tropical cyclone. Some show a re-curve, but others don’t develop it until farther west and show a potentially more threatening track. 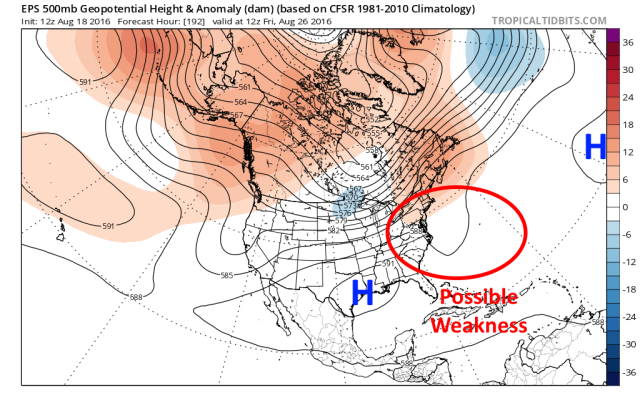 The general weather pattern over North America and the western Atlantic at the end of next week, per the European ensembles, shows that the strongest sub-tropical ridging will be located over the southern US and eastern Atlantic. Although there isn’t a large trough in between, there may be enough of a weakness to cause a stronger tropical cyclone to curve north. Because of this possible weakness in the ridging, and considerable uncertainty over how quickly 99L possibly develops/intensifies, it is really tough to tell for sure whether or not 99L will threaten land at some point.

My guess is development is slow enough over the next few days that at the very least, a threat to Puerto Rico, the Virgin Islands, and Lesser Antilles is on the table for the first half of next week. Beyond that, it really is tough to call how strong 99L may get due to possible land interaction (Hispaniola) and possible shear from a series of TUTTs that may still be lingering around 20N, so it’s tough to guess on a track. It would take a certain series of events to get a threat to the US out of this system, it’s not impossible but for now I wouldn’t get excited. Once 99L starts developing further it will be easier to determine whether or not a threat to the US exists or not. If there is a threat to the US, it would likely be right around the beginning of September. That is quite a ways away, and a lot can happen to prevent such a threat from 99L, hence my current reservations.

Behind 99L, it is quite possible we have several more systems to possibly track as we head through the end of August and into September, which is the climatological peak of hurricane season in the Atlantic. Tropical waves are lined up over Africa, ready to move out into the Atlantic one after another. Some of our forecast models suggest the favorable upward motion (in green) associated with an MJO wave may move into the Atlantic by the end of August and into September, possibly further encouraging development of these tropical waves:

It’s much too early to speculate on threats to land with anything behind 99L, assuming some of those waves can manage to develop into tropical cyclones, but my guess is we’ll have several systems to track somewhere over the Atlantic into early September.