9/1/16: Hermine on the Verge of Landfall as a Hurricane

Hurricane warnings are in affect for a portion of the Florida coastline; Hermine is a strong tropical storm and is expected to intensify into a hurricane before landfall this evening. The rain and wind remain lopsided, with the southern and eastern sides of Hermine being much worse than the north and west sides…so, locations near and east of the center’s track should see the worst conditions. Flooding rains…tornadoes…a moderate to significant storm surge…and near and just right of the center track, strong to damaging winds…are expected near and to the right of the center’s track.

Check with the Hurricane Center (www.nhc.noaa.gov) and National Weather Service (www.weather.gov) for more up to the minute information.

Hermine is still a very lopsided tropical cyclone, with considerably more convection and wind east of the center than west of the center. With this said, the combination of low shear, strong outflow, and warm waters has allowed vigorous convection to fire over the eastern half of the low level center, and has allowed the center to vertically stack, which has allowed for intensification bordering on rapid over the last 24 hours. Yes, I had my doubts Hermine would be able to pull off becoming a hurricane by landfall, but it appears that’s about to happen. Hermine was just a tropical depression until 18z/2PM EDT Wednesday and is now a 55kt tropical storm as of 12z/8AM EDT Thursday. The hurricane hunters, microwave images, and conventional satellite imagery are showing the formation of a fairly small but robust eyewall…this is still open to the southwest, but if it can close Hermine would quickly become a hurricane and could get close to a category 2 before landfall.

Microwave images this morning confirm that an inner core and eyewall, with very robust convection, have formed and are close to closing off. Even if the eyewall doesn’t close off completely, the very intense convection and latent heat release right over the center should still allow Hermine to intensify into a hurricane before landfall. If we do close it off, a continuation of the borderline rapid intensification is possible, so there is a small but non-negligible shot at Hermine coming in at a category 2.

Hurricane hunter data from earlier this morning showed a few things; it showed that although weaker, the northwestern quadrant did intensify (per flight level winds) during the mission. Also, there’s a very large area of strong winds southeast of the center, which has ramifications for a potentially significant storm surge into Florida’s big bend. In addition, the hunters noted a forming eyewall and a 6mb pressure drop in a few hours as the mission progressed…indicating Hermine is still intensifying.

Water vapor loops do show that a stronger upper level SWrly flow lies just west and north of Hermine. In the immediate future, this should not hamper Hermine, as outflow continues to the west, meaning the cyclones intense convection is enough to overpower the increasing SW winds for now…however, the outflow is weakest to the west of the storm, so we may start seeing enough shear by this evening to halt intensification. 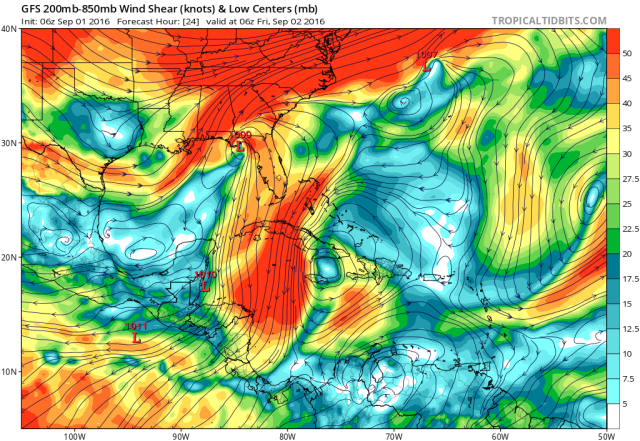 The 6z Thursday GFS run shows shear remaining divergent and away from the center through landfall later this evening, and doesn’t embed the cyclone in an overpowering SW upper level flow until Friday morning over southern Georgia. If this is correct, the increasing winds just north of the cyclone would act as a strong outflow channel and promote vigorous convection up through landfall with Hermine…however, visible satellite and water vapor loops show that the SW winds/shear are fairly close to impinging on the western side of Hermine’s circulation as of this writing…given the western side is Hermine’s weakest, this may mean it can get to the circulation a little quicker.

Dry air has been a classic hindrance to Gulf of Mexico hurricanes maintaining their strength through landfall, however with Hermine’s weakest side being the northwestern side, the moist inflow on the southern and eastern sides may offset this issue…and mid-level dry air may stay away until the shear increases.

Given all of these pros and cons…including formative but robust inner core structure, good outflow, warm sea surface temperatures, limited continental dry air, but shear increasing perhaps in the 6 hours before landfall…my call is for Hermine to become a category 1 quickly this afternoon and landfall as a 65-75kt hurricane…which is a low end to moderate category 1. If shear can hold off until after landfall and the eyewall completely closes…possible but not the most likely outcome in my opinion…this may have time to intensify to a category 2. 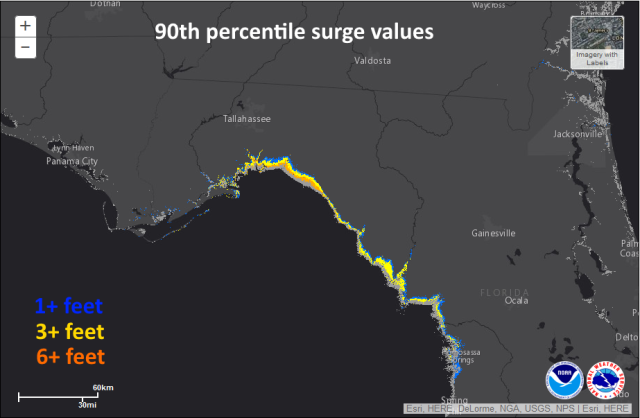 The big issue with Hermine will be water, as the large southern and eastern ends of the storm will cause a long and prolonged fetch into the Big Bend and pile up the water. The NHC’s experimental surge guidance shows a reasonable worst case scenario of 3-6 feet across much of the Big Bend…it’s possible that local bays where the water can really funnel just to the right of where the center landfalls see 6 or more feet of surge. The wind field will be large and strong enough for some wind damage…mainly tree/power line damage, with minor structure damage to homes where the inner core makes landfall.

As Hermine tracks over the Carolinas, a strong boost from the right-entrance quadrant of a jet streak will cause the system to remain strong, even if it stays just inland. This will allow for strong winds, possibly gusting over 60MPH, to occur east of the circulation near the shore. Inland areas will see still strong but somewhat more tame winds. The big story will be the rain:

A shot of cooler air sent south by a trough over the Northeast will cause “frontogenesis” in the mid-levels on the north side of Hermine over the Carolinas…this, along with deformation evident in the wind fields in the mid-levels and strong shot of lift from the jet will wring out very heavy rain over the Carolinas and possibly into eastern Virginia and the Delmarva as Hermine goes by. Flooding will likely become an issue, and the WPC already has a large area seeing upwards of 5-10” of rain as Hermine goes by over the next few days:

As far as tropical systems go, the Southeast has seen much worse, but the freshwater flooding with this storm will still make it memorable and will pose a threat to life and property from Florida through southern Georgia and into the Carolinas. As the low tracks through the Carolinas, a prolonged ENE wind may pile up water along the Virginia coast into the Chesapeake, causing erosion and minor flooding. 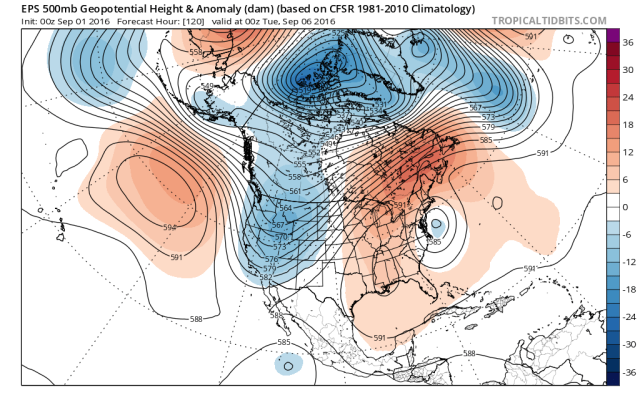 The trough over the Northeast will quickly pull away and leave Hermine “cut off” between two areas of ridging off the Mid Atlantic coast into next week. This will cause it to essentially meander just offshore for a few days. This will cause prolonged beach erosion and rip current issues along the Mid Atlantic and possibly southern New England coast. With ridging building in to the west of Hermine and no strong trough to pull it west like Sandy, I really think that unless Hermine tracks a good bit northwest of where it’s expected to over the next three days that it will end up sitting off the Mid Atlantic coast instead of near or on the coast. This would likely limit impacts to the beaches where a prolonged period of erosion and coastal flooding is possible.

With that said, we’ll still be watching Hermine to make sure it doesn’t end up closer to the coast than expected.