Hurricane Irma is continuing to progress at a south-of-due-west direction across the open Tropical Atlantic Monday afternoon.  Irma is now a powerful category 4 hurricane, and has grown in size since Sunday.  Here is a look at the National Hurricane Center forecast track as of 5AM EDT Tuesday:

Not much has changed in the short term forecast for Irma.  Irma has continued moving west-southwest over the last day, and has gradually intensified as it’s moved over warmer water, into a more moist airmass, and while dealing with only light wind shear.  The hurricane has also increased in size a little bit.  The above is a model image from one of our better performing regional hurricane models this season, and it shows Irma passing very close to the northern Leeward Islands Wednesday morning.  Note how there’s a large area of hurricane force winds (anything purple and higher) that is impacting some islands, with Anguilla in the eyewall and experiencing potential major hurricane conditions.  A small adjustment south from this modelled position (which is possible) would potentially bring hurricane and major hurricane conditions to more islands.  Hence, this is a serious situation for the Leeward Islands. 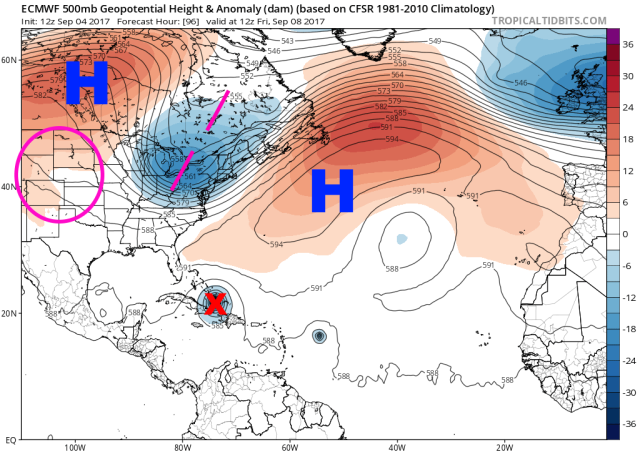 As we move forward, the players in Irma’s future track close to the Bahamas, Cuba, and US have remained the same, though continued small changes in the features continue to cause uncertainty in the forecast.  A continued trend has been for the trough over the eastern US to dig in just a little bit less, which keeps the western portion of the Atlantic ridging (the portion extending towards Florida) a bit stronger.  This has caused the continued southwestern trend in Irma’s forecast track as it gets close to the Bahamas, Cuba, and Florida.  Another key piece to watch is a subtle upper-level trough diving southeast towards the Mississippi Valley, as that is expected to keep a weakness in the ridge somewhere near the Mississippi Valley as the trough in the Northeast moves out.  This is expected to cause Irma to still turn north at some point near the end of the week or weekend.

There is still spread in where Irma’s north turn occurs on Friday or Saturday, which has big ramifications on Irma’s future track and potential US landfall location.  If the hurricane is on the northeastern edge of the model guidance, it would still have an opportunity to follow the weakness created by the eastern US trough and curve out to sea.  If the hurricane is on the southwestern edge of the model guidance, it could go over Cuba and then turn into the eastern Gulf or Florida.  A potential turn in between could threaten the east coast of Florida or the Southeast.  Obviously, where this turn occurs impacts much of the Bahamas as well.

Here is a look at the pattern impacting Irma’s motion Saturday morning.  Note how there IS a weakness in the ridge along the East Coast, but that due to how far south Irma is, some weak ridging is able to bridge the gap and potentially prevent Irma’s escape.  Because the weakness is still there on the East Coast, I do caution to declare a landfall 100% certain to occur in the US.  It’s the likely outcome at this point, but the average track error for day 5 hurricane positions is still rather large, and things trending back towards out to sea are still within the realm of possibilities.  Also note the subtle area of lower heights over the Deep South, associated with the weak upper-level piece of energy that will dive in from the northwest.  This will help guarantee Irma’s more northerly turn, even if the hurricane misses the Northeast trough.  The reason some ensemble members hook more north-northwest into the Southeast is due to Irma’s interaction with this weak upper-level trough, which is tough to predict well in advance.

All told, odds for a US landfall have increased, and a landfall is definitely more likely than out to sea.  Florida (both the eastern seaboard and Gulf Coast) and the Southeast are most at risk, though some direct or indirect impacts can’t be ruled out anywhere on the East Coast yet.  With that said, predictability in some of the smaller-scale features that will impact Irma’s track is still low this far in the future, meaning it’s still a bit early to really hone in on a landfall location.  It’s important to note that less than seismic changes would be needed for a trend back towards the east and perhaps out to sea, so although that outcome is now looking considerably less likely, it’s something we’ll be watching for over the next couple of days.

The oceanic and atmospheric parameters favor a powerful hurricane near or over the Bahamas and threatening Florida and the Southeast.  With that said, potential land interaction with Hispaniola and Cuba would weaken Irma, potentially making the intensity forecast murkier.  Odds for a significant US impact have gone up, but we still have plenty to watch for and hone over the coming days.  Stay tuned!