12/11/17: Moderate to Heavy Snow Coming to Parts of Northeast Ohio 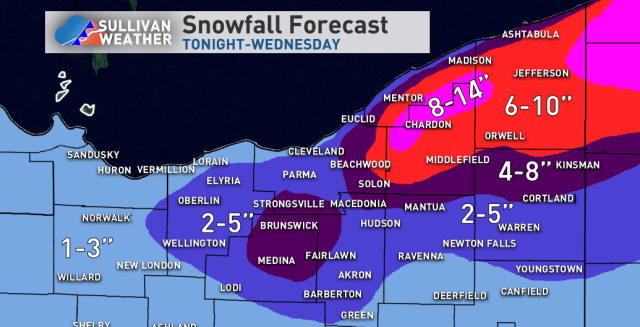 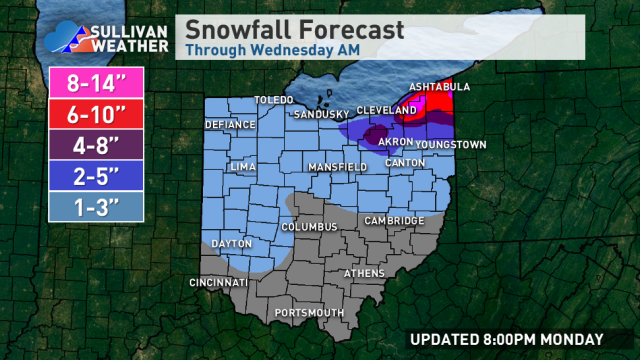 Lake effect snow is on the way for Northeastern Ohio!  Some dry air and a short fetch may limit the snow outside of some narrow bands, but a lot of areas will see a few to several inches of snow…with locally a foot possible in the higher terrain if bands can persist.  Here is the meteorological discussion:

Current water vapor imagery shows a potent vort max over IL that will move roughly east tonight, causing a low pressure to deepen as it tracks over northern OH late tonight.  On the backside of the low later tonight low-level convergence, deformation between the vort max and anther shortwave currently near Lake Superior dropping SSE, and lake enhancement processes will result in several hours of snow over north-central and northeast Ohio.

The deformation can be seen very nicely on the 500mb wind plots on the models, and the heart of it moves right over northern Ohio and Lake Erie between 6z and 12z tonight-Tuesday morning.  This will drive light to perhaps briefly moderate synoptic snow across the lake and northern Ohio later tonight into early Tuesday.

As the low passes to our east, winds will flip around to the NW after 3-4am Tuesday.  There will be some increase in convergence with the wind shift, and also an increase in shoreline convergence downwind of Lake Erie and upslope in the higher terrain.  This may result in a brief burst of better moderate snow with the wind shift itself followed by moderate snow continuing just downwind of the lake in the higher terrain due to convergence along the shoreline and upslope.  Due to temps near freezing the snow will be on the wetter/low ratio side initially, though ratios will quickly go up Tuesday morning as colder air pours in. 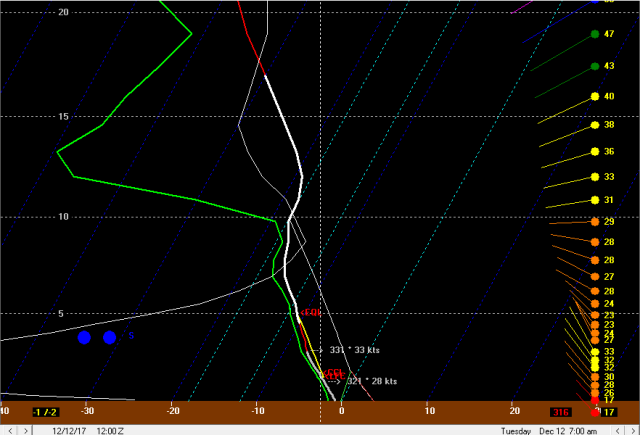 The deformation zone begins pulling away to the east by around 12z/7am Tuesday, which will cause the organized light to moderate synoptic snow to diminish from west to east to start the day Tuesday.  While this occurs, instability will really improve downwind of the lake, which along with any lingering synoptic moisture should keep decent snow going mainly in the higher terrain.  The snow will likely be rather disorganized due to some shear and a short fetch across the lake, but should keep going.  A lowering DGZ should result in ratios beginning to improve as well.

Although the deformation and organized synoptic snow should start pulling away around 12z Tuesday, a potent shortwave will cross.  PVA/lift ahead of the shortwave, along with favorable moisture and instability profiles below 10k feet, should keep snow showers going downwind of the lake, particularly in the higher terrain.  700mb RH remains high until the crossing of this shortwave, and I think that moisture and lift will be enough to keep decent snows going in orographic lift ahead of this shortwave.  With steepening low-level lapse rates, some briefly squally snow showers could also occur outside of any lake effect with this feature.

After the shortwave passage late morning, moisture strips away both at the surface and aloft, which along with the brief period of sinking motion behind the shortwave should result in the snow being disrupted for a few hours.  By later in the afternoon the winds become very well aligned out of the NW and instability becomes extreme, with equilibrium levels of near 11-12k feet and good moisture to about 7k feet.  This should result in lake effect improving, however, the fetch is on the shorter side amd wind speeds in the mixed layer are greater than 30 knots, making it questionable how widespread the lake effect will initially be.

With some drier air and a shorter fetch/stronger winds, upstream connections may be critical to where moderate to heavy bands can develop Tuesday afternoon/evening.  There will be a few corridors to watch:

Outside of any connections there will probably be some sizeable breaks in the snow late Tuesday afternoon and evening.  There may be one last shot of synoptic moisture/lift Tuesday night, which could potentially result in a significant uptick in snow, but this may stay just east of most of NE Ohio.

The models all show a vort max dropping south on the west side of the larger low to our east Tuesday night.  The NAM (above) shows the better lift and moisture just grazing NE Ohio, likely resulting in some increase in activity, especially from Geauga County points east and definitely in NW PA, but probably keeping the heavier activity limited to a few bands.

The GFS is a good 50-75 miles farther SW with the vort max and increased synoptic moisture/lift, and would likely result in a significant increase in activity in the Cleveland metro and secondary Snowbelt as well.  The Euro is closer to the GFS, but perhaps not as extreme with how much RH it shows at 700mb.  Regardless of the vort max, some PVA with the back wall of the trough later Wednesday night may also result in some increase in activity.

The thermodynamic profile is quite good Tuesday night for lake effect snow, with equilibrium levels remaining above 10k feet to go along with lake to 850mb and lake to 700mb temp differentials of near 25C and 32-34C respectively, giving extreme instability.  Winds also become well-aligned, and the wind speeds in the mixed layer decrease a bit (but still remain stronger than preferable given the shorter fetch).  If we see a NAM-like scenario play out with the better synoptic moisture/lift not hitting NE Ohio well, we’ll likely see a few organized and intense bands play out, but with significant breaks between the bands.  NW PA looks to do really well either way, especially where the Lake Huron connection comes in.  If we see better synoptic moisture/lift into NE Ohio, then a more general moderate to heavy snow may break out for a few hours in the higher terrain, with any bands intensifying.  Either way, the synoptic support diminishes later Tuesday night and moisture aloft does start stripping away, so we’ll likely go back to a more localized multi-banded setup later Tuesday night even if we do see a more significant uptick in the evening.

Wednesday morning should feature just a few remnant multi-bands as we lose the synoptic support, moisture strips away above 5k feet, and inversion heights fall.  There may be enough juice for a transient west to east band to flare-up later Wednesday morning and afternoon from Cuyahoga County points east/northeast as the winds back.  With moisture below 5k feet and lift/steep lapse rates through the DGZ, along with a better fetch, this band could produce some additional accumulations.  Seeding from mid-level moisture will also help potentially produce some accumulating snow with this band Wednesday afternoon.  Winds will be backing pretty quickly and will be SW by late afternoon, likely pushing the band over the lake by late afternoon/early evening and keeping it from dumping on any one area before then, but this could lead to one last gasp of accumulations for some areas in the primary Snowbelt.

The synoptic snow should produce a general 1-3” for much of north-central and northeastern Ohio, even outside of any lake effect areas and along the lakeshore.  In the higher terrain of the secondary and especially primary Snowbelt where lake enhancement/orographic lift will augment the synoptic snow, there could be a good period from about 2am to 10 or 11am of decent snows with improving ratios after sunrise.  This could result in a general 3-6” in the higher terrain by noon Tuesday in NE OH/NW PA (secondary Snowbelt will see the lower end of that).

As lake effect gets better organized Tuesday afternoon, will likely see corridors of 1 to locally 3” of additional snow through the afternoon from potentially Huron/southern Lorain and parts of Medina/Summit Counties points northeast.  I think the best chance for 3” will be in the higher terrain of NW PA, most should see less during the afternoon…I just think the bands will be too localized for widespread heavier amounts during just the afternoon.

During the night we’ll likely see at least a few bands with heavy snow persist most of the night.  The area closest to a slam dunk for heavy accumulations overnight will be the higher terrain of NW PA due to a very high likelihood of synoptic enhancement to the snow and a Lake Huron connection, along with a longer fetch over Lake Erie and more terrain to wring out the moisture.  In NE Ohio I think given the tremendous instability and well-aligned winds that two or three more intense bands will setup and may drop up to a few inches, even if we don’t get the better synoptic moisture and lift.  If we don’t see the synoptic assist, totals in NE Ohio will likely vary from 1 to locally 4” additional overnight…locally could see more, but it would be very localized and is hard to pin down ahead of time.  If there’s better synoptic support over NE Ohio as well, which the GFS and Euro do currently show, then a widespread 2-4” in the higher terrain with amounts of potentially over 6” in better bands would be on the table.  For now my forecast will be a compromise solution with a general 2 to locally 5” overnight in the higher terrain of the NE Ohio Snowbelt, including potentially a band well SW of Cleveland as discussed above, with less than 2” along the shore.  Will go for a general 3-7” in the higher terrain of inland Erie County and northern Crawford County PA overnight Tuesday night, but a locally higher amount is quite possible if a more dominant Lake Huron connection sets up for a length of time.

On Wednesday have to think any band would be transient enough that additional amounts will struggle to exceed 1-3” anywhere.  Will anticipate light additional amounts from the potential band in northern and eastern Cuyahoga County, Lake County, Geauga County, Ashtabula County, and perhaps Erie County PA.

For storm totals…highest will be in NW PA, where I’m coming up with around 9-19” (will go with 12-18”).  In the higher terrain in northern Geauga and inland Ashtabula County, I’m coming up with around 7-17 (will go with 8-14”).  The higher terrain south of CLE in the secondary Snowbelt I’m coming up with 5-12”…I highly doubt the 12”, as the higher ends of each period after the synoptic snow are due to a potential localized heavier band, so I’ll call that area 4-8”.  The NAM has that SWern band setting up from central Medina County into northern Wayne County towards Stark County for quite a while…think that is a little too far SW, but it’s not unheard of for a band in this type of flow to work it’s way down towards CAK in southern Summit County, so I will show somewhat heavier amounts in that area to account for the possibility.  Will show just 1-3”/2-5” amounts along the shore in Lorain/Cuyahoga/Lake Counties, but bump up some farther NE where there’ll be better synoptic support during the lake effect.  Will show amounts increasing in the higher terrain in southern and eastern Cuyahoga County due to better orographic lift.  Could see a 10” amount in extreme east-central Cuyahoga County if banding can set up over that area for any length of time at some point.