THE TIME HAS COME! For the first time this fall, we are looking at the potential for a decent lake effect snow event in Northeastern Ohio late Saturday night through Sunday night.

A fairly potent low pressure will track northeast across Lake Erie Saturday evening and push a strong cold front across Lake Erie. Behind this front, the coldest airmass of the season thus far will move into Northeastern Ohio on a west to at times west-northwest wind. This system will drop moderate to heavy snow across Iowa, southern Wisconsin, northern Illinois, Michigan, far northern Indiana and perhaps extreme northwestern Ohio. Very little synoptic snow from this system will fall in Ohio outside of far NW Ohio, where perhaps a few inches may fall Saturday into Saturday evening.

925mb temperatures will fall below freezing quickly by mid to late Saturday evening across N OH, signaling any remaining precipitation changing to snow. The deformation zone will miss NE OH well to the northwest Saturday night due to the low track being to our northwest, so any synoptic snow showers will not add up to much.

The attention will then turn to Lake Erie later Saturday night as instability increases off the lake and winds become better aligned out of the west. 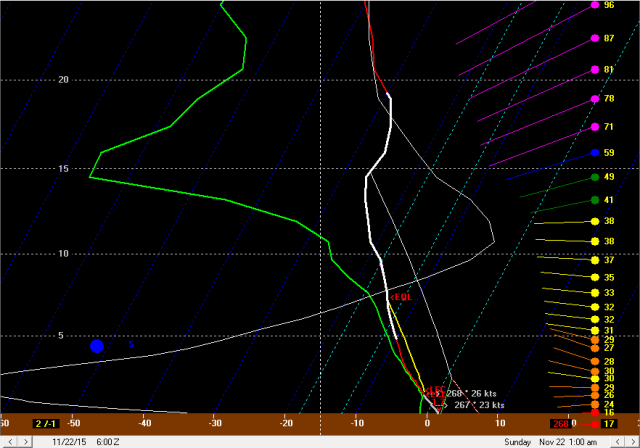 The GFS and NAM (NAM shown above) both bring the winds around to westerly with moderate lake induced instability, moisture to about 8k feet and high inversion heights by 6z Sunday. This should allow some lake response to begin late Saturday night. With a mainly west wind, you’d expect the best snow to occur over Lake, Geauga and Ashtabula Counties in NE Ohio into NW PA, with northern Cuyahoga County (especially northeastern) possibly getting grazed. The question at this point is how strong is convergence over the Snowbelt, and is any upstream lake moisture involved? 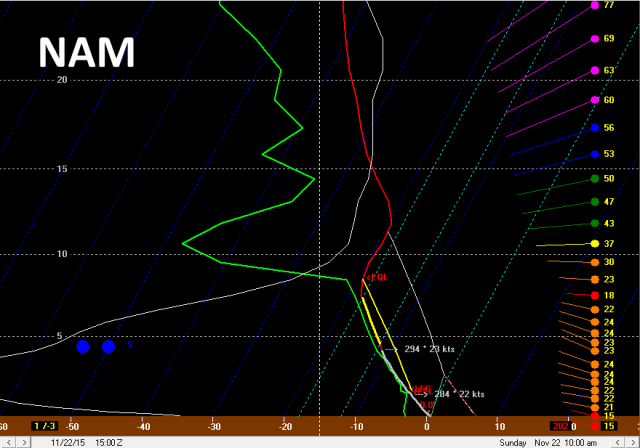 The NAM and GFS both briefly get winds to a little more WNW for a few hours Sunday morning, before ridging starts building in and the winds starts slowly turning more W and then eventually SW. 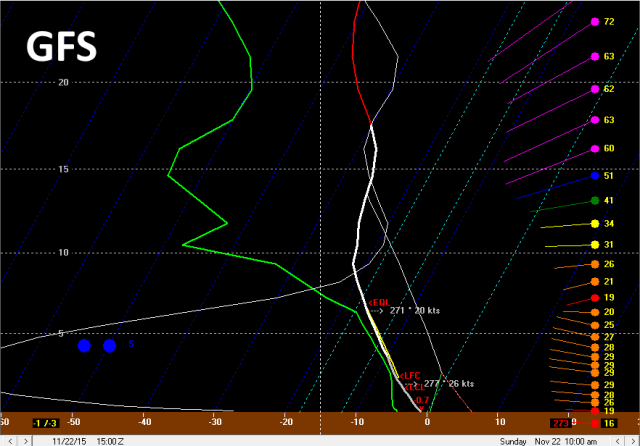 As winds start backing Sunday afternoon thanks to ridging building in, convergence should remain strong/possibly strengthen across the northern primary Snowbelt, but banding will also start slowly shifting up the lakeshore. Inversion heights and moisture depth really start diminishing Sunday evening after remaining decent to favorable through Sunday afternoon, and by midnight Sunday night any lake effect should be light to moderate and confined to perhaps northern Ashtabula County and Erie County PA as winds continue to back as ridging pushes in. 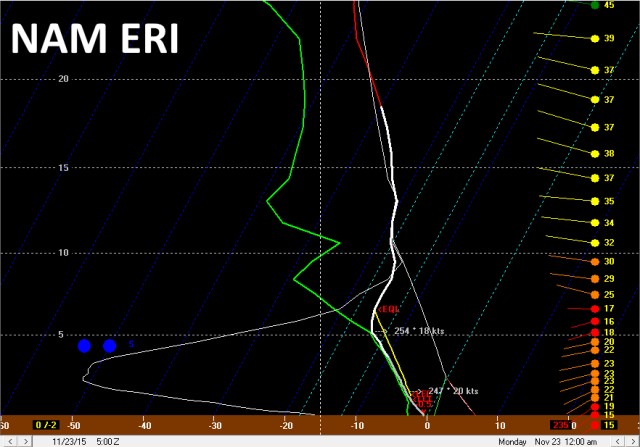 In general, the ingredients appear to be there for heavy lake effect snow:

-Moisture depth is between 7-10k feet through Sunday afternoon

The big questions are when does convergence flare up and help support a strong, single band, exactly where does the band setup, does the band move much, and how will Lake Michigan moisture possibly influence lake effect off of Lake Erie?

With winds trying to turn more WNW early Sunday, that tends to strengthen convergence near the lakeshore…especially when surface pressures over land are trying to rise and push winds more offshore. The 0z hi-res NAM shows convergence starting to develop over the Snowbelt by 4am Sunday, and shows it persisting until the end of the run at 7am Sunday. 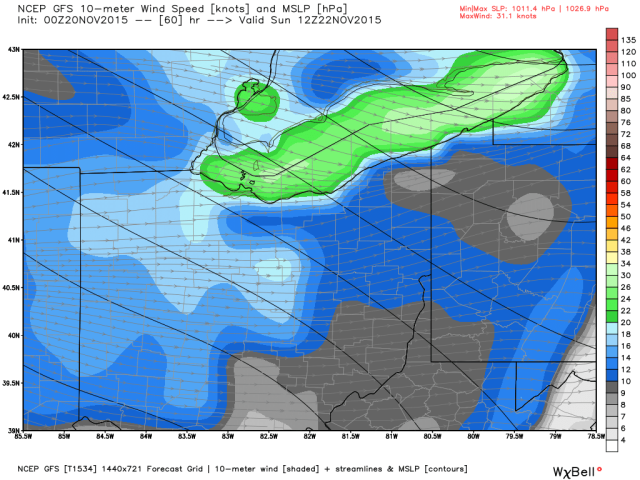 The 0z GFS also has pretty strong convergence across the Snowbelt Sunday morning, but actually weakens it for a few hours Sunday afternoon. I can’t get a good zoomed in version of the lower res NAM right now, but it appears to do something similar. The GFS and NAM then both flare up convergence late Sunday into Sunday evening as ridging really starts nosing in, before any banding would then shift offshore: 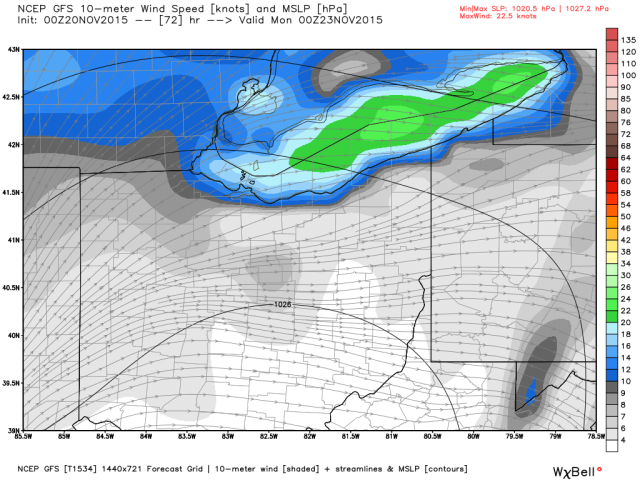 I’m not sure what causes this possible brief weakening of the convergence Sunday afternoon. The NAM appears to hint at potentially a very, very subtle trough moving by, possibly disrupting the wind fields? Either way, as we head towards evening, convergence should really increase as temps on land plummet and surface pressure continue to rise from the south. If there is indeed a small trough that passes early Sunday afternoon, which would argue for decent activity Sunday morning, as heavy lake effect often occurs just before a trough passes.

With pretty good evidence for decent convergence Sunday morning for several hours, I’d have to imagine a fairly well defined convergence band will form. With winds over the lake fairly strong and out of the WNW, this convergence and any associated band would likely settle inland a little bit into southern Lake, a good portion of Geauga and central and southern Ashtabula Counties. With a WNW wind, there is some risk of any band settling into northern Cuyahoga and perhaps even northeastern Lorain County too. If convergence weakens as shown on the models Sunday afternoon, any band could become disorganized for a few hours…although with well aligned winds, good shear, orographic lift in the higher terrain of the primary Snowbelt and still some frictional convergence, I can’t picture the snow completely stopping. I’d then expect the snow to redevelop Sunday evening as ridging really builds in and convergence increases again, although by this point the band would likely occur farther northeast than Sunday morning and slowly be shifting farther northeast as time went on. 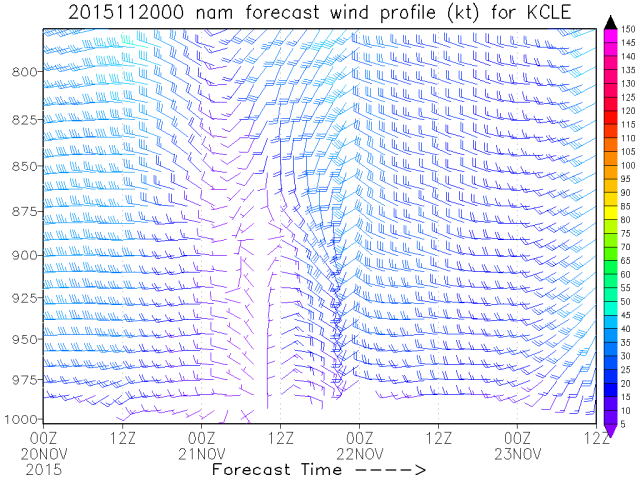 As for how steady any banding would be, the NAM doesn’t show winds moving much late Saturday night into Sunday morning. There are some fluctuations, but no large shifts until Sunday afternoon when the winds start backing towards the southwest. With any banding Sunday morning driven by convergence caused largely by the lakeshore, and winds not moving a ton, it’s quite possible that any band late Saturday night into Sunday morning is fairly steady for several hours, before convergence possibly weakens for a time Sunday afternoon. By Sunday evening the winds will be shifting, so any band that redevelops along the eastern lakeshore may only stay over any given spot for a couple of hours.

So, with all of this said, let’s try to figure out how things will play out and how heavy amounts may be:

I think there’s a good chance a good W-E convergence band develops after midnight Saturday night into mainly the primary Snowbelt…initially Lake, northern Geauga and Ashtabula Counties. The band should settle south some early Sunday morning as there seems to be good agreement on the winds going WNW in this timeframe. This should push the band into a good portion of Geauga County and southern Asthabula County, with northern Lake and Ashtabula Counties possibly seeing a lessening of snow at this time. With a WNW flow over the lake, if it actually occurs as currently modelled, convergence would likely increase enough along the central lakeshore for some banding into northern Cuyahoga and perhaps northeastern Lorain County Sunday morning for a few hours…with the best potential for decent snows on the east side, although not impossible for some accumulations on the west side. There seems to be support for convergence weakening for a few hours Sunday afternoon, possibly due to a weak trough moving through and altering the wind fields, which may disrupt the band some. However, there should still be enough support for at least snow showers continuing. Winds do start backing slowly Sunday afternoon so the snow should end during the afternoon in Lorain and much of Cuyahoga County, and shift north some in Geauga County. By Sunday evening, rapidly falling temps overland and high pressure continuing to nose in should cause convergence to increase again…probably across Lake and northern Ashtabula Counties…likely causing any banding to reflare. The banding should slowly shift northeast up the shoreline and be out of Ohio around midnight or so Sunday night.

With extreme instability, decent moisture, high inversion heights, fairly low wind shear and the potential for Lake Michigan moisture helping things late Saturday night into Sunday morning, snowfall rates of 1-2” per hour seem possible under any banding. If banding becomes slow moving for several hours as I expect, snowfall totals would quickly approach half a foot in the favored areas and could exceed it. With 850mb temps cooling below -10C by Sunday morning with 925mb temps of -5C through the event, any decent snow band will produce accumulations down to the lakeshore…and in the lower elevations of Cuyahoga and Lorain Counties…although, warmer surface temps near or slightly above freezing near the immediate shoreline could cause lower snow ratios and hence somewhat slower accumulations near the immediate lakeshore under any banding. If banding becomes more disorganized for a period Sunday afternoon as seems possible, snow accumulations would obviously slow considerably. By Sunday evening moisture and inversions do fall some, so snow rates may not exceed 1” per hour consistently in any re-flareup as it looks now.

I’m not extremely confident in throwing out hard accumulation numbers yet…although I will certainly do so Friday evening at some point…however, I suspect that locations that get under the good band Sunday morning…assuming it forms…would likely be the jackpot. At this point I think this occurs in far southern Lake, the northern half of Geauga and central Ashtabula Counties. Moderate accumulations could occur in parts of eastern Cuyahoga County and also along the lakeshore where banding may not be as consistent during the heaviest part of the event. I do think there’s opportunity for prolonged enough banding with good rates to see totals of at least 6” wherever the jackpot zone occurs…with a decently large area seeing at least 3”.

Potential caveats are the Euro is weaker with the surface low than the GFS/NAM/Canadian/UK and has a shorter window of good lake effect. The Euro did trend some towards the more amped camp this run. The GFS has remained extremely consistent with its solution. This gives me decent confidence the event plays out similar to what the GFS would imply, but it’s not 100% confidence yet.

With that said, here’s my general thinking…I’ll put hard numbers on this Friday evening. 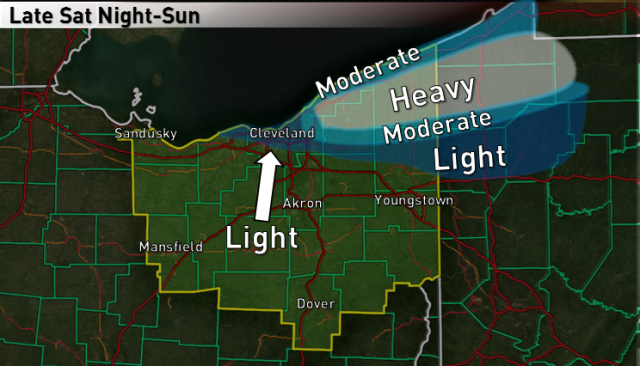 This entry was posted in Storm Forecasts. Bookmark the permalink.